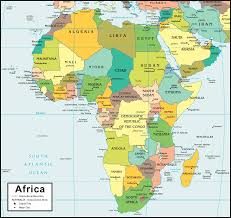 Africa has no history, have been robbed of honour and dignity-Commentary

by afrikanwatchngr@gmail.com
By Obadiah Mailafia, News/comments, May 7, 2019 “The greatest nations are marked by a sense of collective memory that undergirds their political and leadership traditions. China, for example, has a long historical memory dating back to millenniums. So is the small nation of Israel. Britain prides herself in being the “the Land of Hope and... Read More

Security Siege: Ibo land is not a conquered territory: I fear for their silence-Ozekhome, SAN, writes

“The greatest nations are marked by a sense of collective memory that undergirds their political and leadership traditions. China, for example, has a long historical memory dating back to millenniums. So is the small nation of Israel. Britain prides herself in being the “the Land of Hope and Glory” – the inventor of Magna Carta that pioneered the social contract between government and the governed throughout the civilised world.  By contrast, countries like those of Africa have been told they have no history and that whatever past they might have had is mired in chaos and darkness. They have, by virtue of that very fact, been robbed of all honour and dignity”

THERE are great nations and there are mediocre ones. There are also run-of-the-mill nations as well as outright failed states. Echoing the inimitable language of the English playwright William Shakespeare, we could say that some nations are born great; some achieve greatness; while yet others have greatness thrust upon them. It might not be that easy defining what constitutes a great nation. But we know it when we see it.

I think there is nothing controversial in saying that the United States, China, India, Britain, Japan and Germany are indeed great nations. Some would add Canada, France, Australia, Saudi Arabia, Turkey, Indonesia, Iran, Mexico and Brazil as runners-up.

Seven elements, in my opinion, are important ingredients in the making of great nations. Nations First, economic prosperity is crucial. All great nations must possess a high level of economic prosperity as measured by GDP, per capita income and technological prowess. The greatest nations are also those that have resolved the basic economic questions such as provision of public goods (infrastructures, power, energy, public health and education) as well as employment, food security and a minimum level of welfare for all its citizens.

There must also be a high level of technological capability. It should not be a predominantly extractive economy but an economy rooted in industry, ICT and technological capability. Above all it must be an innovative, knowledge-based society. Secondly, it must possess a sound monetary system. Russian communist leader V. I. Lenin once declared that whoever controls your currency is your master.

A great nation must have control over its national currency and its central bank must be relatively autonomous and highly professional. It must promote a strong, stable and internationally convertible currency which is the necessary foundation for financial stability, national competitiveness and long-term prosperity. Thirdly, a great nation must possess a stable and centralised government with a high level of state effectiveness.

An effective state is one that has a stable political system with institutions robust enough to manage conflict, ensure effective civil administration, monopolise control of the instruments of legitimate influence and ensure law and order, with bureaucratic machinery that serves the people with fairness and justice. The armed forces, police and security services must be effective in defending the territorial integrity of the country while protecting the constitution and ensuring the security of the citizenry. An effective state is one that delivers public goods and collective welfare in an effective manner.

And it must govern based on the precepts of constitutionalism, the rule of law and good governance. Fourthly, a great nation must have a strong historical memory. The greatest nations are marked by a sense of collective memory that undergirds their political and leadership traditions. China, for example, has a long historical memory dating back to millenniums. So is the small nation of Israel. Britain prides herself in being the “the Land of Hope and Glory” – the inventor of Magna Carta that pioneered the social contract between government and the governed throughout the civilised world.

The relatively young American Republic also has a deep sense of history; believing that the Universal Declaration of Independence in 1776 remains a landmark on the long march of human liberty. By contrast, countries like those of Africa have been told they have no history and that whatever past they might have had is mired in chaos and darkness. They have, by virtue of that very fact, been robbed of all honour and dignity. It is also important that the sense of national pride from the collective history of the people is shared by all the citizens, regardless of ethnicity, region, class or religion.

The Americans believe that their country was founded on sacred principles: “We hold these truths to be self-evident, that all men are created equal, that they are endowed by their Creator with certain unalienable Rights, that among these are Life, Liberty and the pursuit of Happiness. “That to secure these rights, governments are instituted among men, deriving their just powers from the consent of the governed, That whenever any form of government becomes destructive of these ends, it is the right of the people to alter or to abolish it, and to institute new government, laying its foundation on such principles and organizing its powers in such form, as to them shall seem most likely to effect their safety and happiness.” France has always defined her place under the sun as the land of “liberty, equality and fraternity”. France sees herself as the guardian of universal civilisation.

The Germans, after two catastrophic wars in the span of a generation, have repositioned themselves as the leaders of the new Europe; a voice of civility and moderation in international politics. Crucially important is also that those national myths are shared by all communities within the country as a whole, regardless of religion and ethnicity.

Sixth, the necessity and inescapability of nation building and elite consensus. All great nations are also those where the leadership elite, regardless of ethnic, religious or regional differences, have attained a broad consensus defining their sense of collective national purpose and destiny. There has to be a sense in which, no matter the depth of the divisions, they feel that they are all British, Indians, Canadians and Americans first and foremost. There will always be differences, but the elite would agree on the basic rules of the game. There are also certain a priori no-go areas. These are necessary for the sake of the survival of the system as a whole. For the British, for example, the no-go areas include the person of the monarch, integrity and independence of parliament and national defence and security. Linked to this is commitment to the long-term project of nation building. Great nations do have their national political challenges; but they are generally settled about their resolve to remain as one single indivisible country. All their leaders, regardless of party or ideology, are committed to fostering policies that ensure the integrity and continuity of the country rather than its dismemberment. Finally, all great nations are marked by a high sense of national pride. The greatest nations have a deep sense of national pride in their past, their present and future. They do not muck about with national symbols such as the flag, national anthem, their currency, parliament, and the honour and dignity of their head of state.

You will never catch a denizen of a great nation singing of his country as a “jaga jaga country” nor would you catch a member of the opposition, however, embittered or alienated, describing his fellow-citizens as “inmates of a zoo”. Children are taught from an early age to take pride in the past and present of their country. They are made to feel an obligation to work arduously for its future. Just like no sane young man can forsake his mother, children who grow up in great nations are taught to love their country and to work continually for its good no matter the odds. They learn to stand tall for their country – in fact, most would ultimately be prepared to die to preserve its honour. Where does our beloved Nigeria stand today in the ranking and hierarchy of nations? What are you and I doing about it? Do not ask for whom the bells of the century have tolled – they toll for you and me.