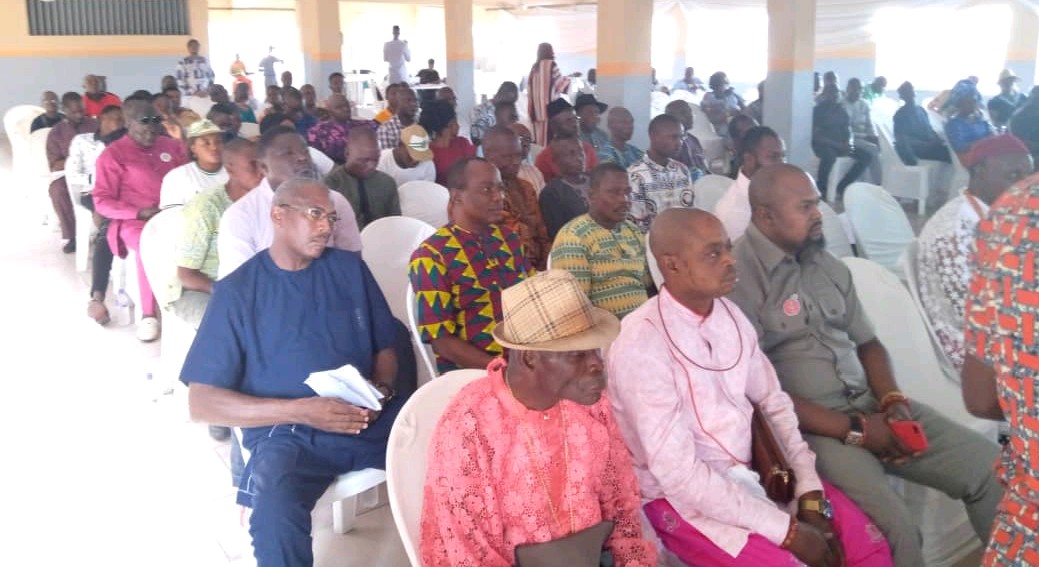 7 million illegal weapons are in the hands of disgruntled Nigerians-Expert, says, Akpore was a victim of insecurity

Bishop Onaga, Mbaka and Politics: Between the stubborn flock and its shepherd

Dr. Joseph Ambakederimo, who delivered the lecture of the day titled Chief Demas Akpore and the resolution of Nigerian Security challenges said that, it is estimated that about 7 Million illegal weapons are in the hands of non- state actors and criminal elements in Nigeria. “It is said this number represents 70% of the 8 to 10 Million illegal arms in the West African Sub-region are domiciled in Nigeria. Unmanned extensive borders aid the inflow of these small arms and light weapons. These illegal arms stoke up violent conflicts, armed banditry, piracy,hostage taking Kidnapping, Cattle Rustling, Militancy/ Terrorism that we experience in Nigeria today.

There is however, an evident shift on what actually constitutes security in the post-cold war era.  At the moment, there are attempts to broaden it to accommodate other relevant, or critical, elements within this conception. Issues such as economic development, equality, political accountability and good governance are now regarded as fundamental to any comprehensive understanding and explanation on the question of security; perhaps, this is because of the fact that the conventional militaristic conception of security that dominated the Cold War discourse proved ineffectual and grossly incapable of meeting security expectations among many countries. In this new conception, human development is considered as central. Thus, we see in this shift, a new and broader conception in which security entails the capacity of a state to defend itself from external threats with all the necessary means at its disposal, and internal threats through overall socio -economic well-being of its citizenry.

The military intervention in the political process of the early 1980s was conditioned to a significant extent by what was widely believed to be the deepening polarization of the Nigerian State between two classes. These classes were the political class that cornered Power and appropriated public resources for their own personal aggrandizement and the remaining populace who suffered the consequences of those acts.

The situation was so bad that observes noted that the level of inequality created through deliberate policies of social and political exclusion led to a heightened state of insecurity that culminated in the overthrow of then civilian administration on the last day of 1983…..Chief Demas  Akpore was a Deputy Governor as at that time and we are here today talking about the life and times of him…and the resolution of the Nigeria security challenges…what an irony. The succeeding military administrations in the ensuing years almost collectively succeeded in entrenching politics of exclusion in which certain privileged class that transcended regional, cultural and religious boundaries emerged as the new power broker in the country.

Two common denominators of this class, was and still remain, it sun fettered access to state resources and its exclusive control over the levers of political power in the country. Democracy help cement the hold of power that this class exerts. In all corners of the country, the phenomena of “Godfatherism “. Rigging and vote buying actually substituted for the exercise of popular will and choice in electing public officials. As a result of this politics of exclusion, a deeper psychological and social inequality is fostered among the citizenry part of the implication of which, today is the total loss of confidence in the democratic experiment, and great disenchantment among most citizens with the government. Unlike in advanced societies where economic power offers political leverage, in Nigeria the reverse obtains, with one dominant social class determining, to use the words of Harold Lasswell;  ‘who gets what, when and how’. Therefore, the economic problems including poverty, unemployment, corruption and inequality, structural politics of exclusion, and a discriminating social system in which an individual will never realize his potentials without a ” godfather” provide the cannon fodder of  radicalization, social tension, conflict, violence, and the ultimate break down of law and order as we are presently witnessing in Nigeria of today”

Chief Oghemure lmene, publisher of the Urhobo voice newspapers, who was the Chairman of the occasion extols Akpore’s virtue, noting that he was a social cruder and builder of human capacity- with loved for his people. ‘He was a good, loving and friendly man who had great passion for the betterment of his people.

On his part, the Deputy Senate President of Nigeria, Senator Ovie Omo- Agege advocated that it is time for Governor Ifeanyi Okowa to leave politics and restore all the privileges accrue to a former deputy governor and his family, Chief Akpore, since his wife is still alive.

Dr. Otive Igbuzor, president of the foundation expressed satisfaction over the life and time of the late former Deputy Governor, noting that his life was full of emulation and legacies, and that his foundation will continue to project the legacies of the former.

At the end of the discussion, a Clarion call on the federal and Delta State government and good spirited individuals to immortalise the late Akpore, as his most priceless legacies cannot be quantified.  Highlight of the event was the award of cash prices- scholarship to various undergraduates from the Delta Central Senatorial district who have performed excellently well in their academics.