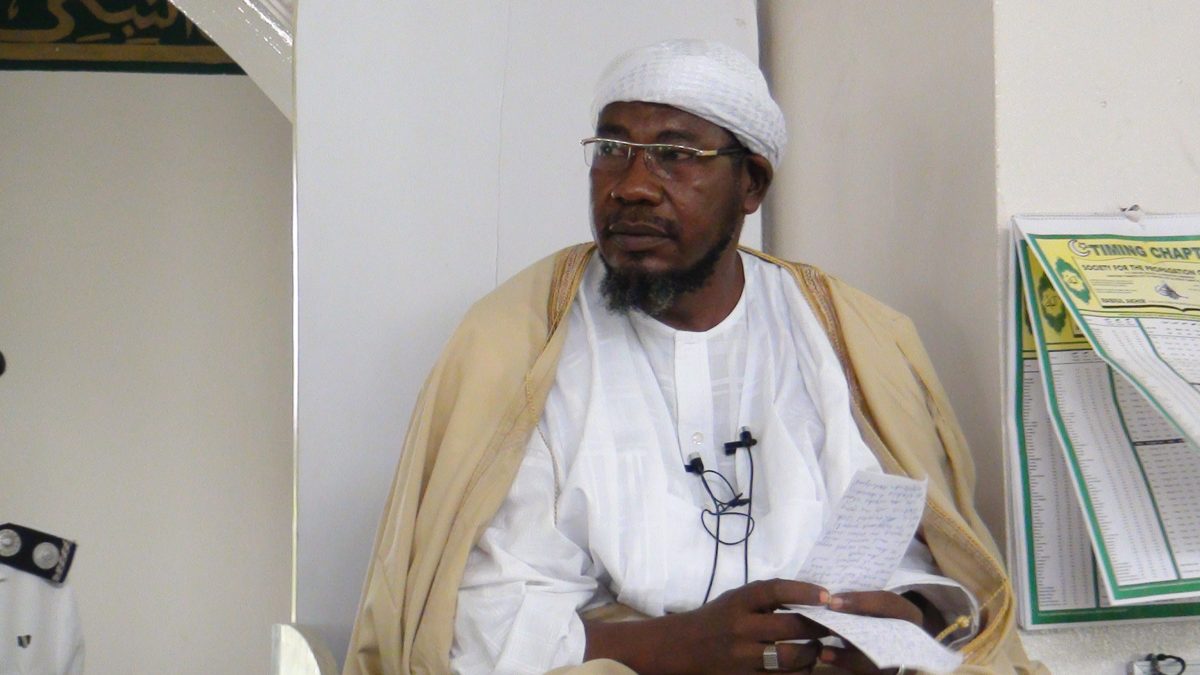 Imam Nuhu Khalid: If he spoke wrongly, bear witness to the wrong, a Nation with bunch of sycophants-Commentary

by afrikanwatchngr@gmail.com
“I want to believe that we all have failed, I mean I failed as an Imam to tell you that life is sacred, you all failed. Aspirants to tell your children that killing is bad, our community leaders failed, politicians failed, governors failed, especially, his Excellency, the President of the Federal Republic of Nigeria, you... Read More

Parmigiana di Melenzane. Have You Ever Heard of It?

“I want to believe that we all have failed, I mean I failed as an Imam to tell you that life is sacred, you all failed. Aspirants to tell your children that killing is bad, our community leaders failed, politicians failed, governors failed, especially, his Excellency, the President of the Federal Republic of Nigeria, you have failed-Imam Khalid

In 2005, Dolly Parton had released a song, titled, ‘blowing in the wind’ written by Bob Dylan. But I became aware of this song, when I joined the defunct Ave Maria Choir of the Saints Michael, Raphael and Gabriel Catholic Church, Satellite town, Lagos in 2006. Then, the Choir often use the song as dismissal or closing hymn when the priest must have given the final blessings. I began to learn the song regularly and its in-depth meaning.

But three things  caught my attention which are very significant to reflect about; capturing the unanswerable questions and problem created by mankind and its environments, the doubt and the dying hope of man, the human failures  as to peace and justice to live a free life of no hate and envy.  These are things I came to understand in Parton’s bowing in the wind in later years. Here are the lyres:

This song is very visible to blind and audible to deaf, that how many of us will die before those who swear an oath to protect us will act, and how many property would be lost before they wake up from their sleeps. Maybe, the dead should rise and come and tell our leaders the truth, maybe, they will listen to the spirit than the living. Maybe, we should all die in silence. Maybe at this, the leaders can lead themselves and live in continuous luxuries  and vanity or they can lead the dead from the cemeteries created as an act of wanton destruction of properties and lives under their watch. How long are Nigerians going to be dying like fowl, and how many mass grave  are we going to be having in the country? Is Nigeria not at war with imported foreigners alleged to have been recruited in 2015 general election. Mr. President needs to be proactive and decisive against this terrorists who have continued to murder sleep of innocent Nigerians. So, we must first, secure the country before the 2023 general election, which Imam  Sheik Nuhu Khalid postulated in his sermon that got him irresponsibly sacked by those who believe they can play God.

“We are going to vote in 2023, but under one condition. There must be security in Nigeria. Prior to that, we are not going to vote anything. If that is the only language you understand, we’re going to speak it, because our lives are important. We are people and we want to live and our dignity is important as well. Our wealth is important. Every path in process is important, therefore, you must do something to spear our lives and make our security workable. We can’t afford to be moving like this. People bombing our trains, killing our people, kidnapping our people as if there is no government in the country. They (terrorists) can gather information, they can get intelligence, they can dispatch information, and they can dispatch intelligence, as if they are government of their own. While our government cannot share information and stop the rubbish on our ways. I said it that we can’t afford it. We need something better than this, and we deserve that thing better than this. We’re going to pray but we going to tell you the truth. That corruption is everywhere, that is why we are seeing this, and you have to do something about it”.

That we live in a country where truth is expected to be kept  secret, never.  God never sleeps nor slumber, because, he remains God forever. Sacking of  the chief Imam, Nuhu Khalid by the Committee of the mosque at Apo Legislative Quarters, Abuja, on Monday, over a sermon he delivered last Friday, criticising Nigerian leaders especially the Country’s President, Muhammadu Buhari over  his inability to end banditry, kidnapping, wanton destruction of properties  and loss of lives daily is a disservice to Nigerians . Rather than our leaders to listen to the voice crying in the wilderness and see how strategic synergy can be formed, they conspired and fired the Imam, who already before lashing President Buhari and his men, knew the consequences of the battle he has prepared to enter and was ready for it. So, it wasn’t a surprise for him after his sack. Yes, he has passed the message, and the world have taken it as the truth, and whatever persecution he faces is worthless to Nigerians.

The Imam had already sacrificed himself, believing that, it is better to die for the love of a nation with the crying masses without hope than to live with blood thirty environment that is supposed to protect lives and properties, which is primary objective of governments all over the world.

When the history of President Buhari’s eight years is written, I am sure, Imam Khalid would be in a good book for speaking to power and against what he considered a failed government, even as those who picked holes in his sermon failed to understand that the Imam did not accuse President Buhari as a lone failure, but acknowledged that all have failed, including himself, so why the uproar and the anger. Is all about high service of rascality and display of pride. Khalid in a viral video last week Friday has accused the Federal government of incompetency and lack of will power to tackle insurgents ravaging the entire north, especially the recent attack on Abuja-Kaduna railway that left many dead, others injured.  Parts of  Khalid’s sermon:

“I want to believe that we all have failed, I mean I failed as an Imam to tell you that life is sacred, you all failed. Aspirants to tell your children that killing is bad, our community leaders failed, politicians failed, governors failed, especially, his Excellency, the President of the Federal Republic of Nigeria, you have failed us. We have your video telling Nigerians that the military is capable. It has all the requirements to tackle this insurgency and if you are voted into power, you are going to make sure that happens in a short time. “You have been given four years and an addition, yet people are dying like fowls, killing is becoming the norm in Nigeria under your watch Mr President. “If there is no Nigerian to tell you, I will take the responsibility of telling you and I will take the responsibility for the consequences, because the lives and properties of Nigerians are above all. “Let me tell you, Mr President, under your watch, bandits are demanding, are taxing Nigerians — is that the provision of the constitution of Nigeria. Under the constitution of Nigeria, no one has the right to tax any Nigerian except being authorised by the federal government”

Now, that Khalid has joined the leagues of critics like Bishop  Mathew Hassan Kukah, Fr. Ejike Mbaka, Apostle Johnson Suileman and others; it  is now good for our health and democracy, that if men of valours refuse to fight the battles of the weak, then, a day will come, the valour will be crushed. That is the situation Nigeria is about entering and it is badly dangerous as a nation to survive.

However, if Imam Khalid have spoken wrongly, let those who prepared his sack letter point it out, if not, why struck him with sycophantic letter of dismal from the Mosque. It shows the kind of leaders without conscience the country parades , including character and empathy. A beast of no nation.

So, we must begin to love Nigeria as a country rather than personal aggrandizement and cheap popularity that will fade away. I am happy that the Imam have expressed his worries over the killings and suffering of Nigerians under leaders who care not about the lives of their citizens. Let us all rise up like the Imam to defend Nigeria, our only land and pride. Our salience as citizens will deepen our sorrow, so therefore, we must all rise to give hope to Nigeria of our dream- of no more killings and suffering. We must defend our fatherland to the latter before 2023, and we must shine our eyes like the sun to choose leaders who will feel and prefer solutions to our plights.