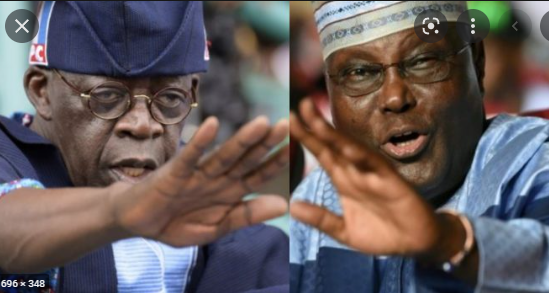 2023:Your beer parlour narrative of history is misleading, Tinubu hits back at Atiku

by afrikanwatchngr@gmail.com
“Atiku ever an expert in not telling the truth also did not come clean over his once-upon a time preference for same-faith ticket. In 1993, after Atiku and Kingibe lost to MKO Abiola in the SDP presidential primary in Jos, Atiku was the choice of the Yar’Adua camp to become Abiola’s running mate. Abiola overlooked... Read More

Bishop Onaga, Mbaka and Politics: Between the stubborn flock and its shepherd

“Atiku ever an expert in not telling the truth also did not come clean over his once-upon a time preference for same-faith ticket. In 1993, after Atiku and Kingibe lost to MKO Abiola in the SDP presidential primary in Jos, Atiku was the choice of the Yar’Adua camp to become Abiola’s running mate. Abiola overlooked him and picked the more cerebral diplomat and bureaucrat, Babagana Kingibe. In all the tonnes of biographies written about him, there was no where he said he opposed Shehu Yar’Adua’s support for his candidacy as Abiola’s VP. He was not against it, since it favoured him. Now, it is politically convenient and opportunistic for him to oppose Tinubu-Shettima ticket.Political Credentials: Most reprehensible was Atiku’s lies about how many times he ran to become the governor of Adamawa or old Gongola state”

The All Progressives Congress (APC), Presidential Candidate, Sen. Asiwaju Bola Ahmed Tinubu has lamblasted former Vice President Atiku Abubakar, the presidential Candidate of the opposition party, (PDP) over his recent outburst on Arise Televiosn on Friday, narrating how he parted away with Asiwaju. Meanwhile, Tinubu who  responded  to the former  VP stated that  power and wealth of the country cannot be trusted to such  a character. It could be recall that Atiku who spoke on pertinent issues rising from Muslim-Muslim ticket, on TV station  said  that his fundamental disagreement with Asiwaju  since 2007 was on the same faith ticket and he disagreed with him, and that ended their political union. He also noted how he left  the defunct Action Congress of Nigeria (ACN) and felt out with Asiwaju.

Continuing, the PDP Presidential Candidate stated: “Together with Asiwaju, we formed ACN and I was given a ticket in Lagos and he insisted to be my running mate and I said no, I am not going to have a Muslim-Muslim ticket and because of that he switched his support to the late Umaru Yar`Adua and that was the departing point and of course, it is also a fact that when Buhari emerged in Lagos in 2015 that I also opposed a Muslim-Muslim ticket” I opposed it and my opposition actually reinforced the decision of President Buhari to pick a Christian running mate. So, I have all along opposed that. I don’t believe in that. I don’t believe it is right for a country like Nigeria that is multi-ethnic, multi religious that there should be balancing of interests, whether religious or otherwise.”

Meanwhile Tinubu who detailed his response  through the Director, Media and Communication of his campaign organization, Mr. Bayo Onanuga  on Saturday in a  statement,  wondered why such lies could be told for the sake of power, and so asked Nigerians to dismiss  most of the claims made by the former vice president, while stressing  that the APC was extremely surprised by the fabrications and ignorance displayed by the PDP presidential candidate. Tinubu stated that Nigerians can now see the kind of a leader that is vying for the highest position in the land with so much  disorderliness.

“In the interview, Alhaji Atiku exposed himself as a man who is not prepared for the job he is applying for and a man who can not be entrusted with our commonwealth. He was flippant in his response to important questions about his record of service and how he made money while serving in Customs. He muddled up facts and exhibited befudling absence of mind”

Tinubu however reminded  the PDP candidate that he bungled the interview, even as he described him lawbreaker who out of desperation for power refused power shift to the south. “PDP candidate is a law breaker: It was most shocking Atiku admitted that he cheated the system for decades and engaged in gross misconduct as a government worker. As a customs officer at the Idi-Iroko border, Atiku revealed that he ran a commercial taxi service, claiming ‘there is no law stopping public officers from doing business in Nigeria”. He punched harder, claiming there is no conflict of interest in doing so.

“We found this to be untrue. Every officer in the civil service is expected to comply with a code of conduct and service rules which bar civil and public servants from engaging in private business while in government employment to the detriment of the service he/she is employed to render to the public. The 1999 constitution further codifies this in Part I, Fifth Schedule, Section of 2 (b).

“It says a public officer shall not, except where he is not employed on full-time basis engage or participate in the management or running of any private business, profession or trade. The rules however allow a public officer to engage in farming. We wonder which rule or which law Atiku was relying upon for his gross misconduct as a public officer. It is our considered view that Atiku gamed the system all through his career in public service, culminating in his founding of the Intel Logistics along with Late Shehu Yar’Adua and some Italians, even while he was still in the employment of the Nigeria Customs Service”. We also found it surprising that the PDP presidential candidate does not know the contribution of oil and gas industry to Nigeria’s GDP. He claimed the sector represents 20% of our national GDP whereas it is below 10 percent and it is still falling owing to the growth of non-oil sector under the current All Progressives Congress led administration of President Muhammadu Buhari”

“False Data from Egypt: Atiku Abubakar wanted to impress his audience with his supposed knowledge of international affairs. He ended up embarrassing himself with false data he cited from Egypt. We found his claim that Egypt has 2 million police officers on the streets to be untrue. Various sources put the number at about 500,000 for a population of 104 million and not 80 million as falsely claimed by Atiku”.

On the issue of Rotational Presidency, Tinubu lashes his counterpart, that ordinarily, he  (Atiku) would have respected PDP zone agreement but jettison it for selfish reasons.

“Asked to justify why the PDP jettisoned Section 3c of its own constitution which enshrines power rotation between the North and South, Atiku tried to fudge his answer by focusing on Governor Nyesom Wike and his effort to reconcile with him after he, a northerner snatched the presidential ticket that ought to have been taken by a southerner. While Atiku was playing to the gallery on APC’s Muslim-Muslim presidential ticket, he didn’t see seeking to be President after 8years of a President from his part of Nigeria as politics of exclusion.

“Probed further, Atiku provided several contradictory answers. In one breath, he said power rotation is not in the constitution. In another breath, he said the PDP has never ‘micro zoned any position’. Then he admitted that the party has always rotated power between the North and the South. Atiku’s justification as to why he became PDP’s presidential candidate, instead of a southerner is a perfect example in ellipsis: ‘In politics’, he said, ‘we negotiate power through negotiations(sic)’. Whatever that means.

“Atiku ever an expert in not telling the truth also did not come clean over his once-upon a time preference for same-faith ticket. In 1993, after Atiku and Kingibe lost to MKO Abiola in the SDP presidential primary in Jos, Atiku was the choice of the Yar’Adua camp to become Abiola’s running mate. Abiola overlooked him and picked the more cerebral diplomat and bureaucrat, Babagana Kingibe. In all the tonnes of biographies written about him, there was no where he said he opposed Shehu Yar’Adua’s support for his candidacy as Abiola’s VP. He was not against it, since it favoured him. Now, it is politically convenient and opportunistic for him to oppose Tinubu-Shettima ticket.Political Credentials: Most reprehensible was Atiku’s lies about how many times he ran to become the governor of Adamawa or old Gongola state”

“Mr. Presidential candidate, in case you don’t know due to your limited education, you run for an office, only, when you are on the ballot in an election. Your signifying interest in an office does not mean the same as running for the office. From available records, the first time you contested the governorship election in your state was in 1999. Your name entered the ballot for the first time and you won. Poor grasp of history: Atiku Abubakar also exhibited poor Knowledge of history when he claimed that Abraham Lincoln, one of America’s famous leaders contested the presidency five to six times before he eventually won”

“This is a beer parlour tale that has been recycled over time. Lincoln contested U.S. presidency twice. He ran in 1860 and 1864 and won both, before he was assassinated on 15 April, 1865.The false story about Lincoln’s failed presidential bids sprang from his previous failed state and national elections, from his state of Illinois. They were not the same as America’s presidential election”

“According to historians, Lincoln lost his first election in 1832 for Illinois state legislature. In 1834, he ran again and won.

“In 1843 he ran for Congress. He lost. Three years after in 1846, Lincoln ran for Congress again – this time he won and went to Washington. From established history, in 1848, Lincoln ran for re-election to Congress and lost. In 1854, he ran for Senate of the United States. He lost. Lincoln also made another failed bid for U.S. Senate from Illinois in 1858. He lost to Democrat Steven Douglas. Our conclusion is that Alhaji Atiku Abubakar is ill-prepared to be President of Nigeria if he could bungle a Television interview that was planned well ahead of the day and time the duo of Dr. Reuben Abati and Ms.Tundun Abiola conducted it”

“We expected the PDP presidential candidate to be well informed on any issue before coming on national television to expose himself to avoidable ridicule”, he stated.

Shettima’s unveiling as Tinubu running mate: We’ll constitute an obstacle to the victory of our party-Adamu
Previous Post
RECRUITMENT: We’ ve concluded the exercise-NPC, says, any vacancy now is a scam