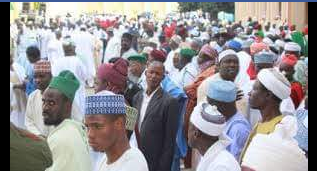 by afrikanwatchngr@gmail.com
-News/Comments, October 26, 2022 KOGI-The APC Senatorial Candidate for Kogi Central ,Mr Abubakar Ohere, has scolded youths to vote and not fight during the 2023 electioneering campaigns. He gave the advise on Tuesday while speaking as special guest at the North Central Youth Parliament Symposium, titled: ‘Vote not fight,’ held at Federal College of Education... Read More

KOGI-The APC Senatorial Candidate for Kogi Central ,Mr Abubakar Ohere, has scolded youths to vote and not fight during the 2023 electioneering campaigns. He gave the advise on Tuesday while speaking as special guest at the North Central Youth Parliament Symposium, titled: ‘Vote not fight,’ held at Federal College of Education (FCE), Okene, Kogi. Represented by his campaign Director, Prof. Solomon Avidime, the APC senatorial candidate, described the youths as the “future leaders” of Nigeria.

“As future leaders of this country, you must eschew violence and embrace peaceful and harmonious coexistence. Moreso, as an astute politician and peace loving and patriotic Nigerian, my campaign for the central senatorial seat will be issue-based and nothing more”

“Over the years, student activists are known to sharpen the society for better through constructive engagements and related activities, and this you are doing and very commendably.

“The title ‘Vote not fight’ is coming at the right time, and there’s a need for our youths to be change agents by propagating this concept in the entirety of Ebiraland and Kogi in general.

“I always have great respect for the youths as such so fascinated when you people gather in productive engagements like this symposium.

“This explains reasons why I single handedly sponsored 100 tickets for young people to attend the recent ‘TEDx Okene.’

“Over the years now, we have enjoyed peace in Ebiraland under the leadership of Gov. Yahaya Bello, which is a sharp departure from the evil days of crisis moving across the land.

“It was sad that youths were mostly used to prosecute that needless violence, therefore you must refused to be used to perpetuate violence because violence will always leave at its trail destruction and death.

He warned mischief makers and those planning violence to rethink and embrace peace, because the government would not condone nor tolerate any act of irresponsibility and violence within the state.

“This warning should be taken with all seriousness as our campaigns will be issue based, and engage wittingly to show verifiable achievements that has been made by me, the right choice for the senatorial seat.

“It’s my hope that arising from this meeting, you will all be the agents of change that the society deserves and take up a responsibility of reporting any person or persons planning or perpetuating violence as the general elections draw nearer.

“‘Vote not fight’ concept is what is desired of all of us to propagate as we go out of this hall to the streets, market places, malls and parks,” he charged.

The APC senatorial flagbearer said that he had always supported education and student bodies, assuring the youths of other social support in areas of healthcare and various forms of empowerment.

The News Agency of Nigeria (NAN) reports that the North Central Youth Parliament is an offshoot of the North Central People Forum and was mirrored after the Federal House of Representatives, which is Composed of 52 members representing their respective states within the north central geo-political zone.

The activities of the Youth Parliament includes protecting the interest of youths, particularly in the north central, and contributing to the progress, peace and development of the region.