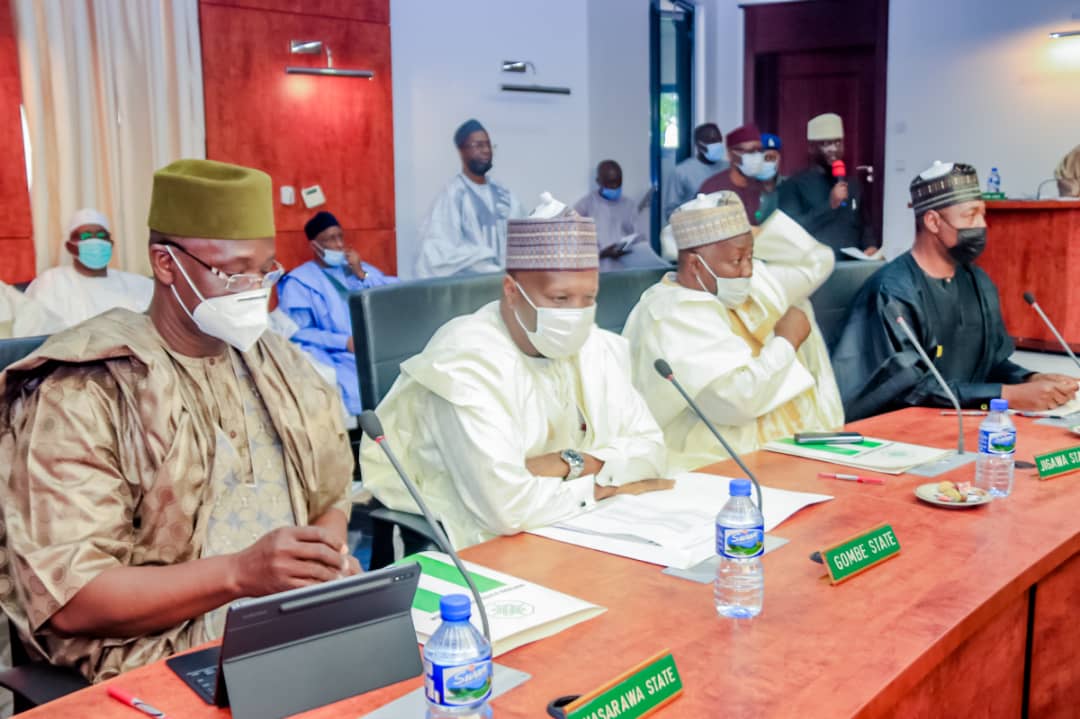 by afrikanwatchngr@gmail.com
By Mark C. Orgu. September 28, 2021 LAGOS-Arising from the resolutions of the Northern states governors’ forum meeting with northern states emirs and chiefs yesterday, led by its Chairman, Barr. Simon Bako Lalong KSGG, the Forum expressed their displeasure over southern governors who insisted that 2023 presidency must come to the south. The Forum also... Read More

Breaking: How Nigerians fight and kill themselves in South Africa, Consul-General condemns act

LAGOS-Arising from the resolutions of the Northern states governors’ forum meeting with northern states emirs and chiefs yesterday, led by its Chairman, Barr. Simon Bako Lalong KSGG, the Forum expressed their displeasure over southern governors who insisted that 2023 presidency must come to the south. The Forum also frown at the insistence of the Southern governors over VAT. In a communique read by Governor Lalong, the Forum stated that there is nowhere in the 1999 Constitution where any region can authoritative lay claim to the rotation of power among regions:

The Northern States Governors’ Forum, in its continuous efforts to address the challenges bedeviling the Northern States convened an Emergency Meeting today Monday 27th September, 2021 at the Council Chamber Sir, Kashim Ibrahim House, Kaduna.  The meeting was also attended by Chairmen of Northern States Traditional Council led by His Eminence the Sultan of Sokoto. The Forum discussed issues of Peace, Progress, Development and well-being of the Northern States.  The Forum took stock of progress made in handling challenges of Banditry, kidnapping, armed robbery and insurgency. After extensive deliberations, the following resolutions were arrived at:-

1.The Forum reviewed security updates from the Region and observed the need for a sustained synergy and coordinated efforts between the Federal and Northern States Governments while noting success of recent measures.  The meeting also noted with concern the constraint of the security services and urged the Armed Forces to embark on simultaneous operations and resolved to share the plans of the Frontline States come up with common with other Region; and assured of its readiness to work in synergy with the Federal Government of Nigeria in finding lasting solution to the current security challenges. 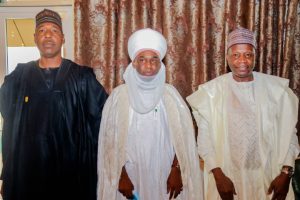 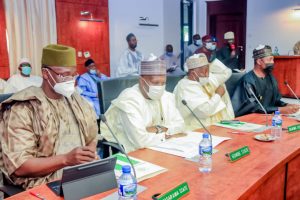 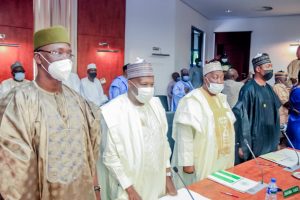 3. The Forum received updates on the Renewable / Solar Energy Project and NOTED that request for land for the project had been submitted and are being processed by the Northern States.  The Committee had commenced negotiations in a public private arrangement and sovereign guarantees to ensure bankability of the project by multilateral financial organizations.  The Forum called on States yet to process the request for allocation of land for the project to expedite action.

4.The meeting received updates on activities of some Committees constituted by the Northern States Governors’ Forum and NOTED that recommendations contained therein are being considered with a view to coming up with implementation strategies.

5.The Forum observed that some Northern States Governors had earlier expressed views for a power-shift to three Geo-Political Zone in the South with a view to promoting unity and peace in the Nation.  Notwithstanding their comments, the Forum unanimously condemn the statement by the Southern Governors Forum that the Presidency must go to the South. The statement is quite contradictory with the provision of the Constitution of the Federal Republic of Nigeria (1999) as amended that the elected President shall:-

(a) score the majority votes;

(c)  In the case of run-up simple majority win the election.

6.The Northern State Governors Forum considered the on-going National debate on the collection of Value Added Tax (VAT). As responsible leaders while we are constraint by the fact that the matter is sub judice we however for the purposes of educating the public make the following observations:

(b) Rivers and Lagos State Government had enacted their own VAT laws and the Southern Governors Forum have expressed support for this course of action;

(c)   VAT is being confused by these State Government as a sales tax. If every State enacted its own VAT Law, multiple taxation will result in increases of prices of goods and services and collapsed in interstate trade. VAT is not a production tax like excise, but terminal tax which is paid by the ultimate consumer;

(d) Another confusion is ignoring observation above and its “overall effect”.  The reason Lagos account for our 50% Vat collection is because most of the telecommunication companies, Banks, manufacturing and other trading activities have their headquarters in Lagos with the resultant and wrongful attribution of VAT

(e) Until and unless the Supreme Court pronounces judgement on the substantive matter between Rivers State and Federal Government, the matter is sub judice and Northern States Governors Forum would respect this.

8.The Forum decried the high level of conspiracies being perpetrated by some Judicial Officers in releasing / granting bail to arrested criminals.  This attitude sabotages the fight against criminality, therefore, there the need to develop good and robust intelligence mechanism amongst States was identified as a panacea.

11.The Forum also call the Federal Government to expedite action on the well establish National Livestock Transformation Programme as a spring board in transiting from the open grazing system as widely practice in the North

Reacting to the Communique, The Chairman of the Southern Governors’ Forum and Governor of Ondo State, Oluwarotimi Akeredolu, on Monday, said  that the Northern Governors’ Forum were measly expressing its rights to freedom of expression on 2023 presidency, reiterating however,  that the resolution reached by the Forum who unanimously and blatantly  condemned the statement by the Southern Governors Forum that the Presidency must go to the South should be termed as a means of expressing themselves.  “They have expressed and indeed exercised their rights under Freedom of Expression. No one can stop them from expressing themselves.” Akeredolu re-echoed  It could be recalled that Southern Governors’ Forum a few days ago in Enugu State insisted that south will not go below the position of the presidency and power must come back to the south. They also agreed that VAT is under the jurisdiction of states to collect.