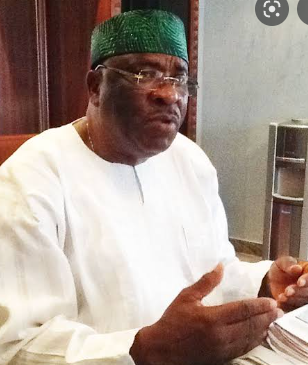 2023: Atiku, always a loser-Sen. Adefuye, says, Tinubu is the next president

by afrikanwatchngr@gmail.com
By Innocent Samuel and Daniel Njienue, June 17, 2022, News/Comments A third Republic Senator, and a prominent Member, Governing Advisory Council, (GAC), Lagos State Government,  Sen.(Engr) Anthony Adefuye, who is also the Olugbon of Lagos has once again said, that the next president of Nigeria will be  the former Lagos state governor, and the national... Read More

A third Republic Senator, and a prominent Member, Governing Advisory Council, (GAC), Lagos State Government,  Sen.(Engr) Anthony Adefuye, who is also the Olugbon of Lagos has once again said, that the next president of Nigeria will be  the former Lagos state governor, and the national leader of All Progressives Congress, APC, Asiwaju Bola Ahmed Tinubu, the party Presidential Candidate in the next year election. He stated this yesterday when the President and the Editor, Afrikanwatch Network Communications, Mark C. Orgu, paid him a courtesy visit at his Lekki residence, Lagos where he  reiterated that Asiwaju’s chances of becoming the next president of Nigeria in 2023 is very bright:

“If you look at the three regions, definitely, Asiwaju will win the West, but for the east, the votes will be divided between PDP, APC, APGA and, Labour party, because of Peter Obi. In the North, we have thirteen governors backing Tinubu. In the North, the votes will be shared also between  the former Vice President Atiku Abubakar and Asiwaju too. Likewise in the South. If you look at the calculation very well, APC will have a clear victory’

The Senator however stressed, this is not the first time Atiku is contesting, he’s always a loser. Even at that time that Buhari did not become president,  he still won more votes in the north than Atiku. It shows that Atiku is not a candidate to win election, he submitted.

Speaking on  Peter Obi’s chances, the Olugbon of Lagos stated that Eastern votes cannot make Obi president but will only divide votes, and that cannot stop  Asiwaju’s victory, noting that the West has never produced the president of Nigeria. “It is actually the turn of the West, nobody in the West has become the president of Nigeria before, it has always been the Ibos and they always claim they have never had the presidency. That is not true, Nnamdi Azikiwe became president, Nnamdi Goodluck Jonathan became president, Ogbuefi Obasanjo became president. In Nigeria today, it is where your father comes from , that is where you are from. Obasanjo is an Iboman, and he played it when he was president and took five ministers from Anambra state, including a central bank of Nigeria, who is now the Governor of Anambra state, while he did nothing for the Yorubas. Even the Lagos-Ibadan expressway, he didn’t touch it, it became a death trap. So, it is clear that, it is the turn of the Yorubas, and I must thank the Northern governors for being decisive and I am very sure, they are for the unity of Nigeria. A decision well taken. Indeed, they will be remembered for good”.

Speaking on Muslim-Muslim ticket,  Adefuye said that, the reason why Buhari did not take Tinubu as his vice then was because of Muslim-Muslim ticket. So, it would be wise for APC to look for a Christian in the North. There are so many Christians in the north. People look at it as if the north is purely Muslim, no, there are many Christians there, Kaduna, Benue, Kogi, Maiduguri, Yobe, and more;  Christians you find in all northern states. The Elder statesman however advised  the party to  look,  and will find,  even as he said that although, it does it mean that if we have Muslim-Muslim or Christian-Christian ticket, that life will be better, no. Is just that, in Nigeria, procedure on it has been laid, Muslim, president, Vice , Christian or the other way round. In all, it is good governance we’re all looking for. Nigerians want better governance and security.

On Vice President Yemi Osinbajo contesting against Asiwaju, it is an ambition but ambition is seen by most Pentecostal Christians as dream and vision.  “once they see vision, it is very difficult to convince them, that, don’t depend on dream too much. When they see dream, they’re not themselves anymore, they follow their dream or vision the way they see it. So, I cannot say, whether Osinbajo betrayed Asiwaju. He’s only just been ambitious , and there is nothing wrong in that.  He is still an APC member. In politics, there are no permanent enemies or friends,no. Let me commend  President Buhari for giving free hands for people to choose who they want, the Senate added.