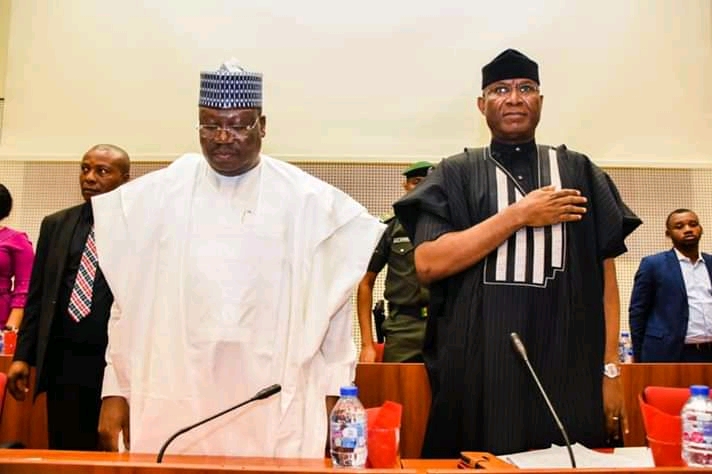 by afrikanwatchngr@gmail.com
By Mark C. Orgu, News/comments, February 12, 2020 ABUJA-Earlier schedule for the inauguration of committee on the review of 1999 constitution took place today at the Senate Conference Hall, with the Senate President, Ahmad Lawan, who reiterated his confidence on the committee, stressing further that the interest of Nigerians is the most importance; he therefore... Read More

Eminent Nigerians for Afrikanwatch annual event on April 6, as Amachree, to deliver lecture

ABUJA-Earlier schedule for the inauguration of committee on the review of 1999 constitution took place today at the Senate Conference Hall, with the Senate President, Ahmad Lawan, who reiterated his confidence on the committee, stressing further that the interest of Nigerians is the most importance; he therefore said that two senators from each geo political zone will be part of the review, while all female senators are automatically members of the committee. The Senate President said that ideas and suggests are highly welcomed by well-meaning Nigerians and others.

In same vein, the chairman for the constitution review committee, Senator Ovie Omo-Agege, the Deputy Senate President, who, in his remark noted that, the 2014 nationalconference will berevisited for the interest of the nation. His address:

“It is my pleasure to welcome you all to the inauguration of the Constitution Review Committee of the 9th Senate which was constituted on Thursday, 6th February, 2020 by the President of the Senate, His Excellency, Distinguished Senator (Dr.) Ahmad Lawan, CON.

Accept my congratulations, Distinguished Colleagues for appointments well deserved as members of this very important Committee saddled with the responsibility of amending the 1999 Constitution of the Federal Republic of Nigeria in this 9th Senate. This calls for dedication, patriotism and selfless sacrifice to our fatherland.

The need for Constitutional amendment lies at the heart of Constitutional theory and practice. Constitutionalism implies that the fundamental rules for effective exercise of state power and protection of individual rights should be stable and predictable and not subject to easy change or the whims of individuals. This is most central in our noble and continual pursuit of the General Will.  It is for this reason that the drafters of our Constitution deliberately made the process of Constitutional Amendment very pains-taking. Yet, the greater need to improve democratic governance or adjust to the ever changing political, economic and social realities has made it necessary for our Nation to embark on this journey again.

These changing times have brought new challenges and today in our country, we are faced with increased insecurity, slow economic growth, rising poverty, and a poor political culture, amongst others. These challenges that will define the way Nigerians will live in the 21st century have continued to agitate the minds of our people. It is against this background that the need for constitutional reforms has once again become necessary.

It is worthy of note that because of the need to incorporate the interests, wishes and aspirations of the people from various ethno-social and ethno-religious backgrounds, we shall embark on far reaching consultations with Nigerians across the six geo-political zones to, aggregate their positions on current issues that require legislative action by way of Constitutional Reforms.

Over the years our people appear to have been polarised along different fault lines which often make it impossible to reach the much-needed consensus in some critical areas where fundamental changes are required. We must guide against this if we are to succeed. There is thus the need for constitutional amendment that will be consistent with the agitations and aspirations of our people. This again, is the whole essence of the General Will.

Our task would be to find a consensus through compromise in order to meet the ever-changing needs of our people. We must understand that the fact that behind our diversity are people united by common challenges of insecurity, unemployment, and a good hope for a better future, provides us with the opportunity to focus on those issues that unite us. It is only by so doing that we can guarantee success and leave for our children a better, fairer and more just Nigeria than the one we met.

As we set out to perform this all-important role that we are called upon to play at this critical stage of our nation’s development, let me appreciate the effort of the President of the Senate in putting together the membership of this Committee. The diligence, hard-work and foresight that were brought to bear are commendable. Mr. President, we appreciate the importance and level of responsibility you attached to the work of this Committee. We will not disappoint you. I also have no doubt in my mind that this Committee will meet the desires and expectations of the Nigerian people. This is because at the end, what unites us is far greater than what divides us.

In carrying out this national assignment, this Committee will no doubt, consider the alteration of the Sixth schedule to make provision for new items, the establishment of National and State Houses of Assembly, Pre-election Matters Tribunal, Governorship Pre-election Matters Tribunals and Presidential Pre-election Matters Tribunal, including time limits for the disposal of all pre-election matters before the conduct of the general elections. We will also consider the need for devolution of power, full Local Government fiscal autonomy, full autonomy of the judiciary in the area of administration of justice, youth inclusiveness in governance, gender parity or affirmative action. This is by no means an exhaustive list. The Committee will also consider inputs from stakeholders and different interest groups across the country.

In addition, this committee will consider the recommendations of the 2014 Constitutional Conference and the Governor Nasir el-Rufai-led Committee on restructuring. We would also liaise with our counterparts in the House of Representatives, the State Houses of Assembly and collaborate and build consensus with all stakeholders to ensure synergy. Development Partners will also play pivotal roles through counsel, workshops, conferences and interactions. The partnership roles of the Executive and Judiciary and their invaluable contributions cannot be over looked as it will enhance efficient and successful outcomes.

Finally, it will suffice to say that an assignment of this magnitude demands diligence and commitment. So, as we embark on this very important legislative assignment, let us use this opportunity to build consensus on constitutional issues that will impact the lives of the people of our great country Nigeria. We must get it right for the good of our people and the unity of our great country. The Nigerian people deserve no less”

Late Seminarian, Micheal, laid to rest: Nigeria has practiced madness for too long-Bishop Kukah, says, north, a graveyard
Previous Post
Meet the young African Author and Journalist, Mark, as he gets commendation nationwide