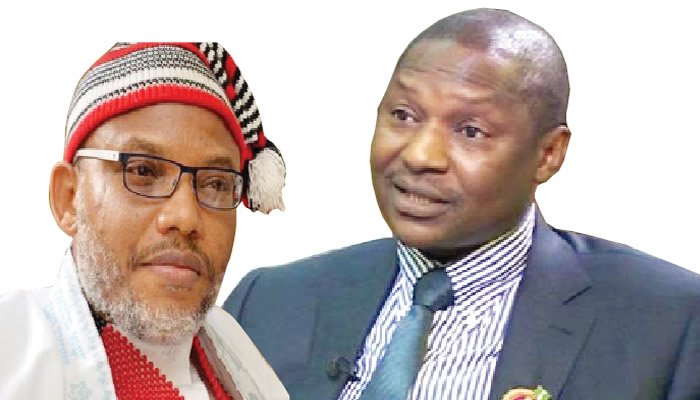 Nnamdi Kanu: Malami, SAN, is not fit to practice law, a disgrace to the Nigerian legal profession-Canadian Attorney-Gen. Madu

by afrikanwatchngr@gmail.com
By Micheal Ojo, July 6, 2021, News/Comments CANADA-The re-arrest and extradition of the leader of the proscribed Indigenous People of Biafra, IPOB, Mazi Nnamdi Kanu continued to generate controversies due to what many described as a bridged of international law. This came as Kanu was picked up by the Nigerian Security Intelligence with the alleged... Read More

CANADA-The re-arrest and extradition of the leader of the proscribed Indigenous People of Biafra, IPOB, Mazi Nnamdi Kanu continued to generate controversies due to what many described as a bridged of international law. This came as Kanu was picked up by the Nigerian Security Intelligence with the alleged help of the Kenyan government, which the country’s Ambassador, Wilfred Machage refuted and noted that, his country was never involved in Kanu’s extradition. Meanwhile Nigerians continue to lament on the issue both home and abroad. Some have advised President Muhammadu Buhari’s government to trade with caution, and others say, it is a new development. But how this will play out in the coming day is what the world want to see, as Kanu’s trial begins July 26.

Meanwhile, in a report by Punch Newspaper on Monday (Yesterday), it captured a story titled “Kanu: Canadian justice minister attacks Malami, demands sanctions against Nigeria” where it said that the Minister of Justice and Solicitor-General of the Government of Alberta, Canada, Kelechi Madu, heated hard on the Nigerian Minister of Justice and Attorney-General of the Federation, Abubakar Malami, over IPOB, Nnmadi Kanu’s re-arrest in Kenya as alleged.  Madu, in his Linkedin’s page, had said that if reports that Kanu was abducted from Kenya were true, Malami was not only a disgrace to the rule of law, but does not deserve to practice.

“The Attorney-General of Nigeria, Abubakar Malami, is a disgrace to the rule of law and not worthy to be an officer of the court. He has shown himself to be a bigot, who does not understand what it means to live in a pluralistic society governed by the dictates of the rule of law. Nigeria is burning, and the people of Nigeria, except those who are holding the country down, want out. You cannot destroy the hope and aspirations of a people destined for greatness and expect them to bow down in servitude. You cannot destroy a generation of people and expect them to not fight for their freedom. The power of the gun, state sponsored terrorism will not achieve peace, or the preservation of Nigeria.

The Attorney-General wants international community and leaders of nations to use all their powers to ensure “real consequences for these arbitrary violations of internationally accepted democratic norms and rules that govern civilised people if truly Kanu was abducted in Kenya.

The IPOB leader will be re-arraign on treasonable felony, terrorism, operating illegal society and illegal arms. It could be recalled that, after Kanu was granted bail, he fled and jumped bail in 2017 to United Kingdom after soldiers stormed invaded his parents’ home at Afaraukwu, Abia State. His trial will resume with Justice Binta Nyako of the Federal High Court, Abuja this month while he remains with Department of State Security, DSS.

Secession: The existence of Nigeria can only be guarantee on the basis of Equity and Fairness-Southern Governors
Previous Post
North-East Governors meet, raises alarm on drug and narcotic substances in the region