by afrikanwatchngr@gmail.com
“The developments have raised the spectre of a new and potentially violent power struggle in Chad, which has endured successive rebellions since independence from France in 1960. Deby himself took power spearheading a 1990 rebellion that overthrew authoritarian leader Hissene Habre, and later faced the same threat of being overthrown – rebel forces reached the... Read More

Afrikanwatch Strategic Services and the need for partnership

“The developments have raised the spectre of a new and potentially violent power struggle in Chad, which has endured successive rebellions since independence from France in 1960. Deby himself took power spearheading a 1990 rebellion that overthrew authoritarian leader Hissene Habre, and later faced the same threat of being overthrown – rebel forces reached the capital in 2006 and 2008, before they were forced to withdraw, and came close again in 2019”

COMMENTARY-What is happening in Chad, a Central African Nation has opened another dangerous historical chapter due to the killing of President Idris Deby. A very bad precedent that will continue to create serious political unrest. Deby, who ruled Chad for 30 years has always been in the front line of fighting terrorism in his country. While doing this, he was loved by his admirers and hated by others especially rebels, who described the late President as “overstayed in power”.

Meanwhile, some foreign political analysts and commentators continued to wonder how a sitting president who joined in a mission against insurgents could just been killed, noting however that, there could be some level of conspiracy or bridge of trust on the part of Deby’s guard. That is another point of view. Now, Chadian military only acknowledged five deaths during the week fighting against rebels and said they have killed 300 radicals. But what political watchers keep wondering is the level of how proficient is the Chadian military could be. Laith Alkhouri, a world renowned intelligence adviser had told Associated that, the world still don’t have the full story of what really happened in Chad, worrying that, things may become worst. “It raises concerns regarding the security forces’ assessment of the clashes and their intelligence regarding the severity of the situation.” He added. 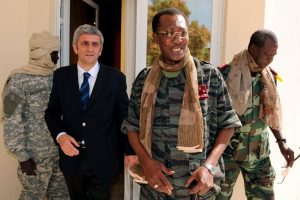 A critical look at how the whole scenario started as reported by Al-Jazeera: “Fighters of the Front for Change and Concord in Chad (FACT) rebel group crossed from Libya over into northern Chad on April 11, the day veteran Chadian President Idriss Deby sought a sixth term in a vote boycotted by main opposition parties. The rebels attacked a border post before advancing south, travelling in heavily armed pick-up trucks. After intense fighting, the Chadian armed forces over the weekend appeared to have slowed the FACT’s progress some 300km (185 miles) from the capital, Ndjamena.

But in a stunning announcement on Tuesday, a day after provisional results showed that Deby had been re-elected with nearly 80 percent, the military announced that the 68-year-old president, who often joined troops on the front line, had succumbed to wounds suffered during a battle against the rebels.

Deby’s 37-year-old-son, four-star General Mahamat Idriss Deby, was swiftly named transitional leader  at the helm of a military council, despite constitutional protocol saying that the speaker of the parliament should have taken power. The military also suspended the constitution and dissolved the government and parliament, but pledged to hold “free and democratic” elections after 18 months”

In response, FACT rejected the military suspension of the Constitution, warming that, such would not be allowed to happen and went online to post. “Chad is not a monarchy. “There can be no dynastic devolution of power in our country,” They went further to threat to depose the leader. 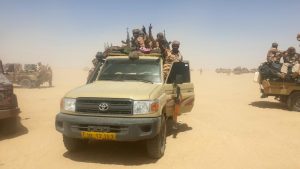 The developments have raised the spectre of a new and potentially violent power struggle in Chad, which has endured successive rebellions since independence from France in 1960. Deby himself took power spearheading a 1990 rebellion that overthrew authoritarian leader Hissene Habre, and later faced the same threat of being overthrown – rebel forces reached the capital in 2006 and 2008, before they were forced to withdraw, and came close again in 2019. (Al-Jazeera)

According to an interview granted to Jerome Tubiana, a researcher, by Al Jazeera on the issue, especially the forming of FACT, Tubiana stressed that the founder of FACT is Mahamat Mahadi Ali, a protracted rebel who, first joined a rebel movement in 1978, and when he was 14 – essentially a child rebel soldier. FACT is based in Libya, where it has a non-aggression pact with warlord Khalifa Haftar, controlling much of the country’s east. The terrorist group base is in Libya in the Tibesti Mountain and are made up of the Saharan Goran people that clashes regularly with the Chadian army.

However, TRT World had also reported that the Chad has had a rebellions in all the 30-year reign of Deby.  According to them, in 2019, French armed forces intervened in the northern Chad and launched an air strikes against the armed group coming in from Libya. In 2008, clashes reached the gate of the presidential palace before Chad’s army repelled rebel forces and pursued them eastward toward the Sudanese border.

In some cases, the late Head of State had openly accused surrounding countries of sponsoring rebels against his government. Chad is a former French colony, and the French government over the years have not relented in providing and deploying military operations in the fight against radical groups. Historically, Chadian military have had a protracted warfare with the militants ranging from Boko Haram, Al-Qaida, etc .With the current political uprising, it is being estimated that over 330,000 Chadians are internally displaced in Volatile Lake Chad, a region known to be a strong of the dreadful Boko Haram strikers

The danger ahead therefore is that, rebels may be advancing more into taking sub-Sahara regions backed up by foreign mercenaries with aides and other supports .This is the time for countries to combine efforts with intelligent gathering and strategic surveillance, otherwise rebels will one day take over legitimate governments and impose their imperialist rules.