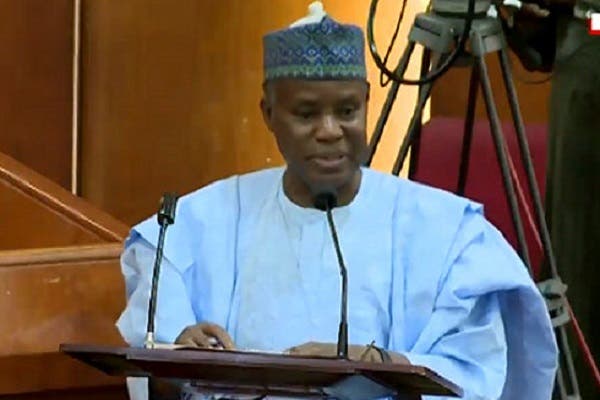 by afrikanwatchngr@gmail.com
-April 22, 2021, News/Comments ABUJA-The Honourable Minister for Defence, Major General Bashir Magashi (ret) has once again narrowed down Nigeria’s problem to political self-interest, conspiracy and hate, stating that the calamity that has befall the country need all sundry. The Minister spoke today while briefing the State House correspondents at the presidential ministerial brainstorming, being... Read More

Why you should choose Microsoft over Linux

ABUJA-The Honourable Minister for Defence, Major General Bashir Magashi (ret) has once again narrowed down Nigeria’s problem to political self-interest, conspiracy and hate, stating that the calamity that has befall the country need all sundry. The Minister spoke today while briefing the State House correspondents at the presidential ministerial brainstorming, being put together by the Presidential Communication Team, Aso Rock Villa, Abuja. Here is his slightly edited selected brief by our media outfit:

“Make no mistake, our nation is bleeding now. It is bleeding because of the self-interest and other primordial considerations underlying decisions, which quite a number of our elite; political, ethnic and religious, make it so. “Such elites are quick to attribute blames to groups other than theirs. The whole idea is to exploit the social division for their political gains and it is because of this divisiveness that Nigeria lacks a national consensus or common comprehensive understanding and the interpretation of what national security is. “Example is Boko Haram, farmers/herders clashes, IPOB and other political associations that are coming up with different mandates and different concerns.

“The rise in vigilantism and identity-based militia, who claim to be working for the political and ethno religious emancipation of their people, a.k.a resource control, secession and regionals self-determination, define the potent threats to the national security in our country. “I would have loved to make a few comments because I will soon be addressing a press conference by three ministers; Minister of Police Affairs, Internal Affairs and myself. “We have made a comprehensive brief as far as the security of this country is concerned and the methods we want to use in ensuring that we strategically and tactically get rid of all enemies of this country.

“Be it political enemy, religious enemy, ethnic enemies and all the political enemies of this country. We have made a comprehensive report or research on that and we have taken our position, which I don’t want to preempt here, but certainly we are coming back with that. What is important is that briefing, we are just trying to inform you of our impression and our concern as far as the security of this country is concerned.

“The latest is the burning of our soldiers, brutal murder of about the soldiers and one officer and the military is not taking kindly to that, let me just tell you this. I have been to the Benue State government, I have seen the governor and we have told him the blatant truth about the position of the military in this country. “Whoever touches the military has no regard for this country and this country is governed by the rule of law and we have accepted democracy as a solution to the liberty of individuals in this country. “We have been very firm, we have succeeded in reiterating to them what we actually want and we have got some answers that the weapons that were captured from the soldiers have been retrieved, at least we have nine of them out of 12 and the perpetrators, they have been captured and taken to the police for proper interrogation and subsequent prosecution.”

Meanwhile, the Minister stated that, the proposed killing of all bandits by the Kaduna State Governor, Mallam Nasir el-Rufai is well development, as he shares his opinion..  “I don’t share that opinion. With my little experience as a lawyer for 37 years, I think I know the rule of law, I know how decisions are taken. Everybody is innocent till he’s found guilty. We’ll try to administer justice to all of them, but where we catch them with weapons, somebody trying to kill you, what do you do? Will you allow him to kill you before make complaint? That area we will not compromise, anybody we pick using arms, we’ll deal with him. “If he fires one round, we’ll fire artillery weapons, lethal, so it can destroy the whole radius, not only himself, even his farm should be exterminated.”

Killing Of A Chadian President, Deby: Are radicals Taking Over Africa? The dangers Ahead-Mark-C. Orgu
Previous Post
Unrest in Chad: Late Pres. Derby Rose To Power Through A Military Coup In 1990- Dr. Anyasi