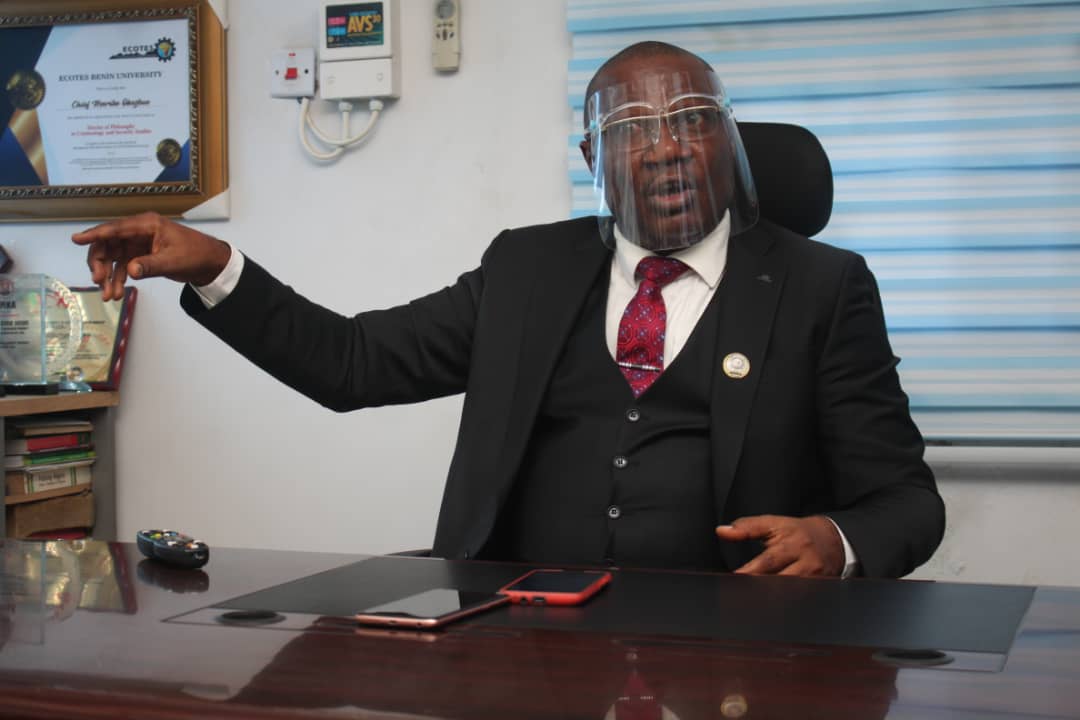 LAGOS-A United Nations-POLACE Ambassador on Peace, Chief (Dr) Nzeribe Okegbue JP, a security expert, who is the MD/CEO of Combatant guards limited cum Philanthropist has re-echoed the lyrics of an American soul singer and author, Dolly Parton,  :” One can only be poor if he chooses to be”. This maxim became the motivation of Okegbue, when four Afrikanwatch Network Crew led by its, Editor-in-Chief, Mark C. Orgu paid a courtesy call to the Ambassador’s office, Destiny House, Bajulaiye, Shomolu Local government Area of Lagos State on a mentorship tour. He also shares his experience as a child and upbringing, while also noting the huge opportunities in the security industry. Daniel Njienue, reports 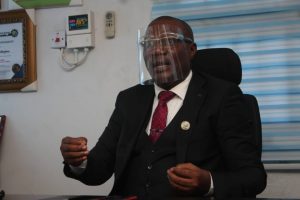 My parents were not rich, but they imbibed the culture of honesty and discipline in all their children. However, my growing up as a child, I never got all I needed in life but I thank God I never went to bed without food. It was tough for my parents, they never had it all to provide a better life for us, but they did their best. I was determined to change the narrative-that one is born poor is not your fault but, if you remain poor is your fault. My parents were not rich, neither were they educated but God was on my side having associated myself with men of honesty and pride in the society.

We lived at Ikoyi then and my father was a domestic staff with the British High Commissioner in Nigeria. Thus, the environment you bring up your children matters a lot, it has a great influence over your children and because of that environment, I happen to attend a primary school where rich men children attended and I was challenged whenever we close from school and you see their drivers coming to pick up their children from school and I was believing, that   one day,  I will be in a position where someone will come and pick up my children from school. 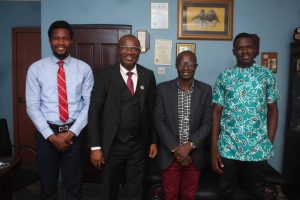 That is why the environment  we live matters a lot because it defines who you are. And that impacted so much on me and I was ready and determine to change the situation and God helping me I made it to the top. The kind of people you associate with goes a long way of determining whether you will be successful or not. If you flock around people who don’t believe in themselves, they will kill your morale for greatness.

And am happy that despite the fact that my parents didn’t go to school but I went and I tried to gather all the degrees I could. During my school days, I trekked to school with my books on my hands without school bag, even my school uniform was full of patches, and I thank God today that my children did not suffer what I suffered  because  I was focused to give them a better future. I remember a number of times, my children will asked, “Daddy how did you get to this level” and I would tell them,  “it is hard work and determination, honesty and putting God first”.  That, changed the  narrative.

It depends on the area you are looking at it, security business is a wide profession.  In security business, you have the electronic security, man-guarding, cyber security, intelligent security, etc. The security industry is so big that if properly harnessed, it would create more employment than any industry you can think of in this country. I ventured into security business as a very young man in the late 80s without the knowledge of my parents. I am a man that has an independent mind because I knew the family I come from. I didn’t want to put much financial pressure on them. So what I did  was , during my  secondary School days especially holidays ,  I went for security training . At a time I was turned down because they felt I was too young but when they tested my ability, they discovered that I was more intelligent than those big guys. So, they marveled at my level of intelligent because I passed the interview, and I was recruited and funny enough, I was doing excellently well.

I gave myself that time because of the passion I had in it and because I needed more income to support my academic career, and my parents never knew about it. At least, my experience in the security industry is more than 30 years. I started as a security guard just like a man-guard, guarding, saluting and opening gate with sure sir. I was happy doing my job well. 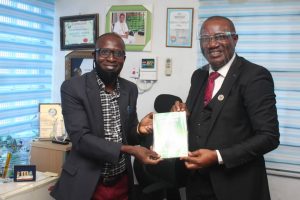 Mark Orgu presenting his book , Historiography of Orogun to Chief.

How I discovered huge hard foreign current and returned it

I worked as a security guard at very young age and recovered things that were missing and handed it over to the owners with all honesty and dignity- and  continued to grow like that. I had opportunities where I could have stolen. My experience.  l had an opportunity when my company was serving one of the biggest international organizations and I recovered huge amount of money in dollars in the early 90s.  This happened in Victoria Island when I was an operation officer . We went on patrol and we discovered that the operative  guard that was supposed to be on duty was no longer there and I decided to stay for the driver to go and call the security man.

That moment, I decided to go round and I discovered a bag there by the flower side- it was a pack of money in dollars. The joy in me was so much to make a name and not to carry the money away. I just went straight and press the bell and a foreigner, a French man came outside and said “young man, what can I do for you”

And I told him, sir, I discovered something. And he asked me.  what did you discover? .And I took him to where the bag was by the flower. The man shouted and was looking at me not knowing it was his house help who took the money and hid it there. So when you talk about honesty it depends on the way you were brought up. At that young age I had an opportunity of carrying the money and that could have turned my life around but all around in a negative direction. I handed over the money back to the man. He was so happy and a report was sent to my company and the foreigner said to my company, “is it possible for me to retain this man.  My company said, it is not possible Sir, because he’s not an operative”. As of that time I have passed the level of an operative but that act gave me a name. To the level that the GM and all the people in the head office were so impressed. The point am trying to make is that, young people venturing into security, is not only because they have passion for it, security can make you, you can make name there and you can also make a living out of it.  Also, It depends on the aspect of security you want to venture into. Protocol is part of security, and a lot of people are making so much money out of it

We have a lot of security challenge in this country and it can be solved if we do the right thing.  If the youths are gainfully employed, they will not have time to commit crime and make government ungovernable. An idle mind is the devil’s workshop and  it is very important that the industry should be properly looked into. I happen to be the Vice Chairman of the Association of License Private Security Practitioners of Nigeria, and we are advocating more corporation and collaboration with government for provide good  opportunity for operation.

When you go to some other foreign countries, private security companies are allowed to carry arms. Nigerian police are overwhelmed, we have about three hundred thousand police personnel  and we have 200million people, it’s not possible for them to properly police this country. They are doing their best but if government want to do the right thing, they will empower private security companies. The only thing is that they are afraid of having guns here and there but they can properly profile those with the guns.  If they properly profile them and give them the opportunity, we will not be bordering our policemen because if you do proper investigation, you will discover that, we have a lot of policemen that are being used for private security protection but if things are done properly, the private security industry operatives are properly empowered, it means you can hire a private guard that is carrying arms and it will help a lot.

The industry is huge, and the challenges we are having in Borno state and other states in the north; you hear  about civilian JTF, they  are majorly youth,  and it has created job opportunities for so many of them. When we were having problem with the Niger Delta, those people who were causing problem, they engaged a lot of them in security surveillance of pipelines and the challenges stopped to an extent. We need to engage our youth more in the security operation. You can engage them on intelligent security because you will discover that one of the biggest challenges we are having in the security industry today is lack of intelligent gathering.

You go to abroad, they get information before anything happens. Now, how do they do it, they mix up with the general masses. You can even train some people and push them to the prison to mix up with inmate and they will begin to interact with prisoners and from there you can get information,  by acting as a prisoner because most of the inmates still have their gangs outside and some of them plan most of their operations right inside the prison.