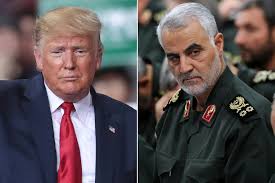 by afrikanwatchngr@gmail.com
-January 5, 2020,news/comments US-What danger will the killing of Iranian Major-General, Qassem Soleimani resolve to, would it drag the Arab world to conventional war, especially when Iranian government has openly said that there will be harsh revenge against the US. Will this action of the US government not create another tension for world war 111,... Read More

US-What danger will the killing of Iranian Major-General, Qassem Soleimani resolve to, would it drag the Arab world to conventional war, especially when Iranian government has openly said that there will be harsh revenge against the US. Will this action of the US government not create another tension for world war 111, well, the world is watching.

Meanwhile this is the historical background of the assassination of the Iranian General : Qassem Soleimani, the head of Iran’s elite Quds military force and one of the most powerful figures in the Islamic Republic, was killed early Friday 3, 2020 in an airstrike in Baghdad by the US Military force. Thousands of people marched Saturday in a funeral procession through the Iraqi capital.

The White House sent formal notification to Congress about the airstrike that killed Soleimani under the War Powers Act, CBS News has confirmed.

President Trump said Friday the action was taken “to stop a war.” He said Soleimani “was plotting imminent and sinister attacks on American diplomats and military personnel, but we caught him in the act and terminated him.”

The Defense Department blamed Soleimani for the deaths of hundreds of Americans, and said he was behind recent attacks on coalition bases in Iraq, including one on December 27 that killed an American defense contractor.

The strike drew a vow of “crushing revenge” from Iran. The State Department told Americans in Iraq to leave the country immediately, and U.S. troops in the region are on high alert.

Lawmakers are divided over the strike, with Republicans applauding Mr. Trump’s action and Democrats warning about the possible repercussions.

Meanwhile, Senator Elizabeth Warren who replied  a tweet from President Trump in which he stated the United States has 52 Iranian sites targeted should Iran strike “any Americans, or American assets,” saying that Mr. Trump was “threatening to commit war crimes.” His tweet:

“You are threatening to commit war crimes,” Warren said in a tweet with a screenshot of Mr. Trump’s tweet embedded. “We are not at war with Iran. The American people do not want a war with Iran. This is a democracy. You do not get to start a war with Iran, and your threats put our troops and diplomats at greater risk. Stop.”

The tweet from Mr. Trump noted that the targeted sites are “at a very high level & important to Iran & the Iranian culture.”

“No President has the right to take a country to war without the informed consent of the American people. The informed consent,” Biden said. “And right now we have no idea what this guy has in mind.” “But when you make statements like that it just seems to me he’s going off on a tweet storm of his own and it’s incredibly dangerous and irresponsible,” Biden continued. “I have no idea whether he has coordinated with any of our allies. I have no idea if he has the support of his own generals and national security team. This is a guy who seems to be unmoored.”

House Speaker Nancy Pelosi issued a statement Saturday night saying the classified War Powers notification “prompts serious and urgent questions about the timing, manner and justification of the Administration’s decision to engage in hostilities against Iran.”

Pelosi raised concerns about the document being classified, and called for an “immediate, comprehensive briefing” of the full Congress.

“The Trump Administration’s provocative, escalatory and disproportionate military engagement continues to put service members, diplomats and citizens of America and our allies in danger,” Pelosi’s statement said. “This initiation of hostilities was taken without an Authorization for Use of Military Force (AUMF) against Iran, without the consultation of the Congress and without the articulation of a clear and legitimate strategy to either the Congress or the public.”

President Trump tweeted Saturday night that the U.S. has targeted “52 Iranian sites (representing the 52 American hostages taken by Iran many years ago)” for attack if Iran retaliates for Soleimani’s death. “Let this serve as a WARNING,” Mr. Trump wrote.

In a series of tweets, Mr. Trump wrote that Iran is “talking very boldly about targeting certain USA assets as revenge.” Mr. Trump said the sites targeted include “some at a very high level & important to Iran & the Iranian culture, and those targets, and Iran itself, will be hit very fast and very hard