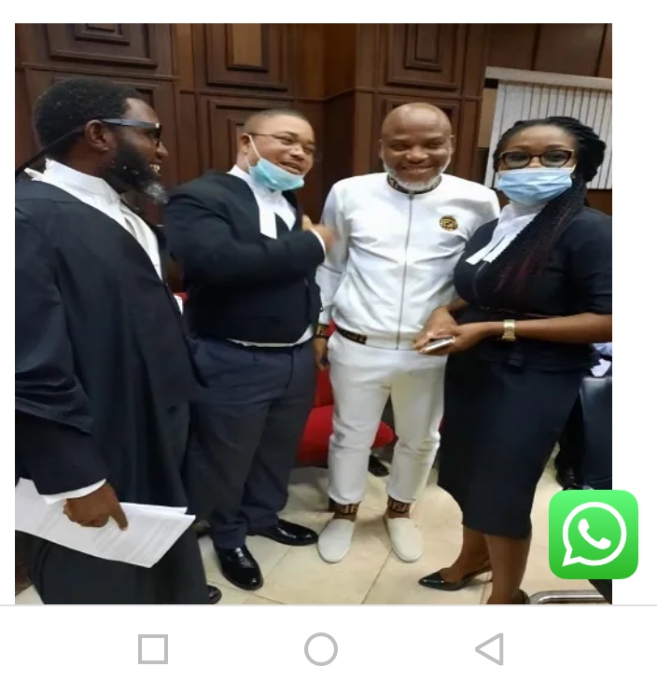 by afrikanwatchngr@gmail.com
-News/Editorial, October 22, 2021 “The charges against the IPOB leader is not new to Nigerians, and of course, he is not the first to face treasonable felony charges and  he won’t be the last. So, why all the paparazzi and the film show. Is just that some people have decided to see this country as... Read More

Commentary: Award of Fellowship By NIHTOUR To A Woman Of Honour And Dignity, A. M.S Anyafulu

“The charges against the IPOB leader is not new to Nigerians, and of course, he is not the first to face treasonable felony charges and  he won’t be the last. So, why all the paparazzi and the film show. Is just that some people have decided to see this country as their personal property, hence, every other person is inferior and must be led the way they want.  No right thinking leader will think this way. A country’s growth solely depends on unity and harmony of justice, fairness and equity”

Finally, the trial of the leader, Indigenous People of Biafra, (IPOB) Mazi Nnamdi Kanu saw the light of the day on Thursday, 21, 2021 as Nigerians, especially from the Ibo extraction were not only happy but excited because, Kanu looks good with a smile on his face while taking a photo shoot with his lawyers. At least, from the very first time, the Directorate of State Service, DSS can deny lawyers access to their legitimate home, (Court). At least, the Police can intimidate and harass lawyers who feel disrespected in their dwelling place. At least, lawyers are now subjected to be helpless in all manner of their legitimate affairs. At least, a former governor of Anambra State, Chief (Dr). Chukwuemeka Ezeife and Sen. Ifeanyi Uba could not be respected as senior citizens as they were told that they are not authorized to witness Kanu’s trial.  The media was not exempted from this drama from the Nigerian security men and women, as they only accredited six news outfits into the hearing Court. Truly, there was a country, as the late Prof. Achebe titled his book. 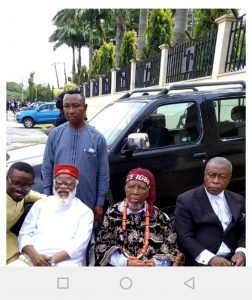 Dr. Ezeife with others

Indeed, Nigeria is witnessing the best democracy since the return of democratic process in 1999 (Laughable). The constitution of the country is suspended against citizens’ right for the sake of a few, who believed that Nigeria belongs to them.  The law presumes every suspect  innocent until proven guilty- it is a constitutional right that suspects should enjoy until the law prove them otherwise. The charges against the IPOB leader is not new to Nigerians, and of course, he is not the first to face treasonable felony charges and  he won’t be the last. So, why all the paparazzi and the film show. Is just that some people have decided to see this country as their personal property, hence, every other person is inferior and must be led the way they want.  No right thinking leader will think this way. A country’s growth solely depends on unity and harmony of justice, fairness and equity.

Nnamdi Kanu’s treasonable case will not be the last because successive military and civilian governments had tried Nigerians on such previously. Heaven and earth did not fall, and it won’t fall under Kanu.  Yes, history had told us how the late Chief Obafemi Awolowo was charged for treasonable felony after crises roasted the Western region between him and Samuel Ladoke Akintola, including the disagreement between them, and the breakdown of law and order, which resulted to the arrest of Awolowo and some of his aides. On September 11, 1963, Chief Awolowo was charged for conspiracy and attempt to overthrow Alhaji Tafawa Balewa led Federal government and was sentenced to ten years in prisonment.

Wikipedia had captured the trial of Major Daniel Bamidele’s ordeal as not only sensational but a turf neck-bent charges because, he played loyalty that caused him his life. “In October 1983 during an official trip to Kaduna to print his divisional brief for the Chief of Army Staff Conference, Daniel Bamidele heard of rumours about a planned coup against President Shagari. When he returned to Jos. He promptly reported to his General Officer Commanding (GOC), Major General Muhammadu Buhari (who, unknown to Bamidele at that time was in the thick of the plot). A week later, Bamidele found himself on a plane to Lagos, detained by the Directorate of Military Intelligence at Tego Barracks and accused of plotting a coup against Shagari. Fake witnesses were paraded and a mock interrogation contrived, while reports were being made to the NSO (then under Umaru Shinkafi) to mislead the Shagari regime.

Meanwhile, the real plot continued underground with the full involvement of the same Military Intelligence group that was interrogating him. Finally, on November 25, 1983, with no credible witness to nail him, and no legal basis to charge him for a one-man conspiracy, Bamidele was released”  Unfortunately, he fell again and was arrested and executed for failing to report the alleged  Mamman Vatsa’s conspiracy. Bamidele’s could not learn from his past experience but fell in the arms of power wrestlers and was executed. His last words at the Tribunal on March 5, 1986 read: “I heard of the 1983 coup planning, told my GOC General Buhari who detained me for two weeks in Lagos. Instead of a pat on the back, I received a stab. How then do you expect me to report this one? This trial marks the eclipse of my brilliant and unblemished career of 19 years. I fought in the civil war with the ability it pleased God to give me. It is unfortunate that I’m being convicted for something which I have had to stop on two occasions. This is not self-adulation but a sincere summary of the qualities inherent in me. It is an irony of fate that the president of the tribunal who in 1964 felt that I was good enough to take training in the UK is now saddled with the duty of showing me the exit from the force and the world”

Chief Lateef Jakande, after the military take-over in 1983, was arrested, detained and later charged for treason. His trial resulted to his conviction in 1983 but later got state pardon and became a minister of work under Gen. Sani Abacha which he came under heavy criticism but defended his acceptance on the basis of the late MKO Abiola’s advice.

Then came the trial of the late Major Akinloye, Akinyemi in 1987 under the then Military dictator, Gen. Ibrahim Babangida. Akinyemi was tried by a military tribunal headed by Gen. Oladipo Diya for plotting a coup against Gen.  Babangida. He was found not guilty of treason. Then on January 26, 1995, he was rearrested, detained and interrogated on another allegation of coup against Gen. Sani Abaacha. A trial instituted against him by Abacha’s regime saw him been sentenced to death, which was commuted to life imprisonment. Luckily for him, democracy came after the death of Abacha, and the military administration of Gen. Abdulsalami Abubakar granted him and others clemency and state pardon. That was March 4, 1999.

What about Gen. Oladipo Diya, Chief of Staff to the Military dictator, Gen. Abacha. Diya was also the Vice Chairman, Provisional Ruling Council in 1994. Being a Chief of General Staff was like the Vice President. Diya was later arrested over an alleged attempt to overthrow Abacha at the military junta with a charge for treasonable felony in 1997.  But the death of the head of state gave life to Diya when Gen. Abdulsalami’s administration granted him pardon, and he was released. All these trials were never tensed like what is happening in Kanu’s case. Whenever his trial comes, security road blockage, movement restricted, lawyers cannot go into the court yard to attend to other cases, and so on.  The question are, what is the fear of DSS ?, what is the fear of the Federal government, that probably, there might be an attack from IPOB or unknown gunmen, or bandits or those they call hoodlums. Nigeria  seriously needs intervention from God otherwise impunity and high handedness will continue to be and the citizens will suffer more.

This editorial concludes by saying that the allegations leveled against the IPOB leader remains a speculation until proven guilty in by  a competent Court of law.  Therefore, the DSS, the Police, and others should stop making the whole scenario in Court yard look like a battle field, rather, they should be civic and professional in their duty as the case continue in November 10.  Emphatically, We want a united Nigeria where rights and freedom of citizens are respected, where equal rights and justice are also eminent.