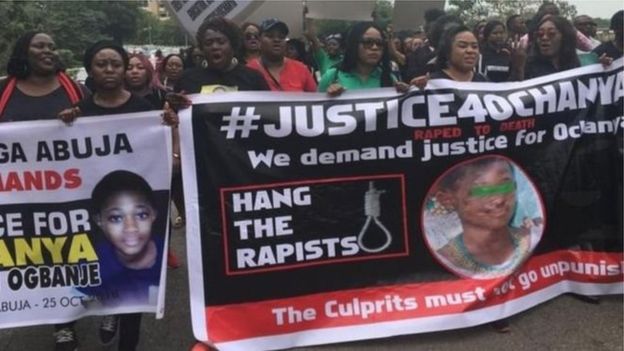 EDITORIAL: Rape cases in Nigeria has become a norm, should we fold our hands?

by afrikanwatchngr@gmail.com
“So, we must all join in the fight against rape cases and never to fold our hands, believing that government would handle it alone. This would amount to disservice to humanity and God” -June 5, 2020, news/comments Nigerians continue to wake up daily with sad commentaries of uncontrollable emotions over rape cases. This bad societal... Read More

Impeachment plot against Trump: Democrats push harder, as Republicans say, it may be impracticable

“So, we must all join in the fight against rape cases and never to fold our hands, believing that government would handle it alone. This would amount to disservice to humanity and God”

Nigerians continue to wake up daily with sad commentaries of uncontrollable emotions over rape cases. This bad societal norms and wicked value if not properly checked, would become a deadly muster that cannot be controlled, like in the case of Boko Haram,. If better measures are not put in place on time, then, we’ll  continue to live with it, and many will suffer unjustly for it.  Now, with the rape case of a 22-year-old student of the University of Benin, Uwavera Omozuwa, at the Redeemed Christian Church of God, Ikpoba-Hill, Edo State, before she died in the hospital is not only an abomination but, a grievous offence that must not be condoled at all. So, efforts must be made to give capital punishment for any culprit involved.  A quick look at few cases.

On August 12, 2015, Media report had it that the Delta born minor, Ese Rita Oruru was secretly taken away by Yunusa  Dahiru, known as Yellow,  from her home in Bayelsa to Kano State for- a forceful marriage and her name was changed to Aisha and converted to Islam. Disturbed by the disappearance of their daughter is the parents of Ese, who cried aloud. This resulted to various organizations, activist groups, and proper investigation to the situation.

In the end, the Police was able to find Ese and took her back to his parents in 2016. Unfortunately, she was already pregnant to the Culprit and finally gave birth on May 26, 2016.  Dahiru was charged with child trafficking, child abuse, rape, kidnapping, infringement on the right to religious freedom, and the denial to free will of an individual. He was later convicted on May, 21, 2020 in Bayelsa by a Federal High Court. The Culprit is to spend 26 years in the Correctional Centre for his misdeed. .

The rape case of Miss Ochanya Ogbanje was a sympathetic one. She was just five years old when she started staying with the family of Ogbuja in Benue State, north central  part of Nigeria.  According to report, the plan was to send her to school if she does her work well. Unfortunately, things turned out to be different when she got to eight.

Sadly, the son of Ogbuja, Victor, her Aunty’s Son started nursing sex idea with the eight years little girl, and finally raped her. Victor also confessed that Andrew Ogbuja was involved too.  Unfortunately, Ochanya later died on October 17th, 2019 after series of ailment.  What a sad story!!

There are so many rape cases in Nigeria unknown.  And so, this is the time for the House of Representatives to pass a serious law against rape case in Nigeria. A capital punishment would be a better option. Societies should be sensitize on the danger of rape and the stigmatization it portends for victims.  However, our Legal system should be strengthen to dispense justice on time when such rape case is presented.  So, we must all join in the fight against rape cases and never to fold our hands, believing that government would handle it alone. This would amount to disservice to humanity and God.