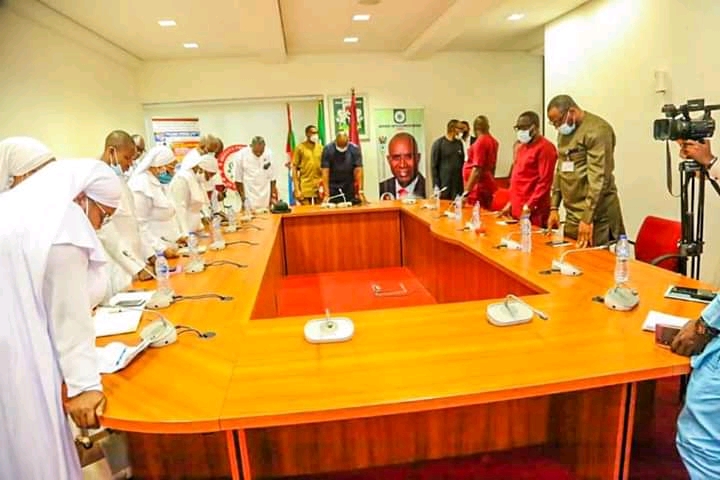 by afrikanwatchngr@gmail.com
“That is why I have proposed a bill for constitutional amendment to reserve 30 percent of seats in the Federal cabinet of every president, going forward, for the youth of this country. And we are also insisting that five of all cabinet seats at the state level be also reserved for youth. And that is... Read More

“That is why I have proposed a bill for constitutional amendment to reserve 30 percent of seats in the Federal cabinet of every president, going forward, for the youth of this country. And we are also insisting that five of all cabinet seats at the state level be also reserved for youth. And that is why I am sponsoring a constitution alteration bill which seeks to reserve 30 percent of appointments for youth and women at the Federal and State level”

ABUJA-The Deputy President of the Senate, Senator Ovie Omo-Agege has assured that the National Assembly will expand the political space for youth and women in the ongoing amendment of the 1999 Constitution.  Omo-Agege stated this in Abuja when he hosted a delegation of the Brotherhood of the Cross and Star, led by Archbishop (Prof.) David Irefin. Omo-Agege who doubles as Chairman, Senate Adhoc Committee on Constitution Review, also called on religious leaders to continue to pray for the country. 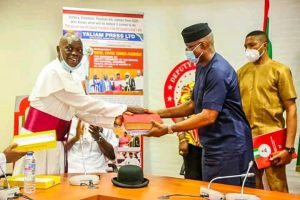 While commending Nigerians for their resilience, the Delta Central lawmaker urged them to strive towards maintaining the oneness of the country He also explained his rationale for sponsoring a constitution alteration bill which seeks to reserve 30 percent of appointments for youth and women at the federal and state level. Titled, “A Bill For An Act to alter the provisions of the Constitution of the Federal Republic of Nigeria, 1999 to specify the minimum number of youths and women appointed as Ministers, Ambassadors and State Commissioners”, the proposal has passed Second Reading and is currently before the Omo-Agege-led panel for further legislative work.

Specifically, it amends Sections 147 and 171 of the Constitution by mandating the President to appoint at least five ministers, ambassadors or high commissioners under the age of 40.  Similarly, the proposed legislation alters Section 192 of the Constitution by providing that “There shall be such offices of Commissioners of the Government of the State as may be established by the Governor of the State, of which (a) At least five Commissioners shall not be more than the age of forty years at the time of appointment; and (b) At least five shall be women.”

According to the legislator, if the bill is passed and signed into law, it will not only expand the political space for Nigerian youth but also give them a sense of belonging. .However, a statement issued by the Special Adviser, Media and Publicity, to the Deputy President of the Senate.Yomi Odunuga, after the courtesy call,  Omo-Agege stressed:  “For us in the National Assembly who are members of the Constitution Review Committee, we are also looking at those areas that require constitution amendment to bring the youth on board into governance. Because we believe that it is best for them to be making the desired change from the inside and take decisions themselves as opposed to being on the streets and protesting.

“That is why I have proposed a bill for constitutional amendment to reserve 30 percent of seats in the Federal cabinet of every president, going forward, for the youth of this country. And we are also insisting that five of all cabinet seats at the state level be also reserved for youth”

“The youth, we are going to define in that bill, to include people from the age of 20 to 40.

The challenges we have in this country are enormous. And we want them to participate. We want them sitting in the Federal Executive Council chambers in Aso Rock, helping our president to make these very hard and tough decisions. We will rather have them there than have them on the streets of Abuja, Lagos, Port Harcourt or wherever”. Omo-Agege also urged religious leaders to pray for the continued peace and unity of the country.

“I also ask you to pray for Mr President, Muhammadu Buhari. God has been good and kind to him. Let us pray for more goodness in his life so that he will continue to provide good leadership at all times. At any particular time in life, there is always a particular leadership that God enthrones. There is a leadership God enthrones where there is peace and in times of turbulence. And we saw all of that in God’s choice in enthroning David and his son Solomon. One was a king in times of turbulence and the other, Solomon his son, was a king in time of peace. “At this particular time in our country, this country needs President Muhammadu Buhari to hold everybody together. I urge you to continue to pray to give him excellent health and grant him wisdom to handle the affairs of state.

“Not too long ago, we had challenges that threatened the very fabric of our nationhood to its very foundation. That is talking about the #EndSARS protests. Speaking as a lawyer, I am aware that our constitution guarantees the right to protest. But that right is not an unfettered right. It is subject to being exercised in a peaceful and lawful manner. The Constitution does not guarantee right to commit crimes. That is why we supported those who lawfully protested and also condemned those who were not lawful protesters, hijacked the lawful protests and committed murders, arson and other sort of destructive activities. And most of those who also suffered from these acts are also Nigerians. They are also our brothers and sisters. So while condemning what those ones had done, we should also be protective of the innocent ones who had not committed any illegal activity. So we remain thankful to God that as a country, we survived this. And we pray for God to give us the wisdom as a government to quickly address the legitimate concerns raised by our younger ones. The government is working very hard on trying to address them,” he stated.

Earlier, leader of the delegation, Archbishop David Irefin applauded the legislative intervention of the senator, adding that members were impressed with his contributions on the floor of the Senate. The lawmaker representing Bayelsa East Senatorial District and Secretary General of the body, Senator Biobarakuma Degi-Eremienyo also accompanied other leaders on the visit

Just in:GM-DSP’s group for inauguration in Ukwuani LGA on November 14, as leader says, we are ready to take over
Previous Post
Successful :72 Legal practitioners now Senior Advocates of Nigeria, (SANs)
Next Post
0 Comment