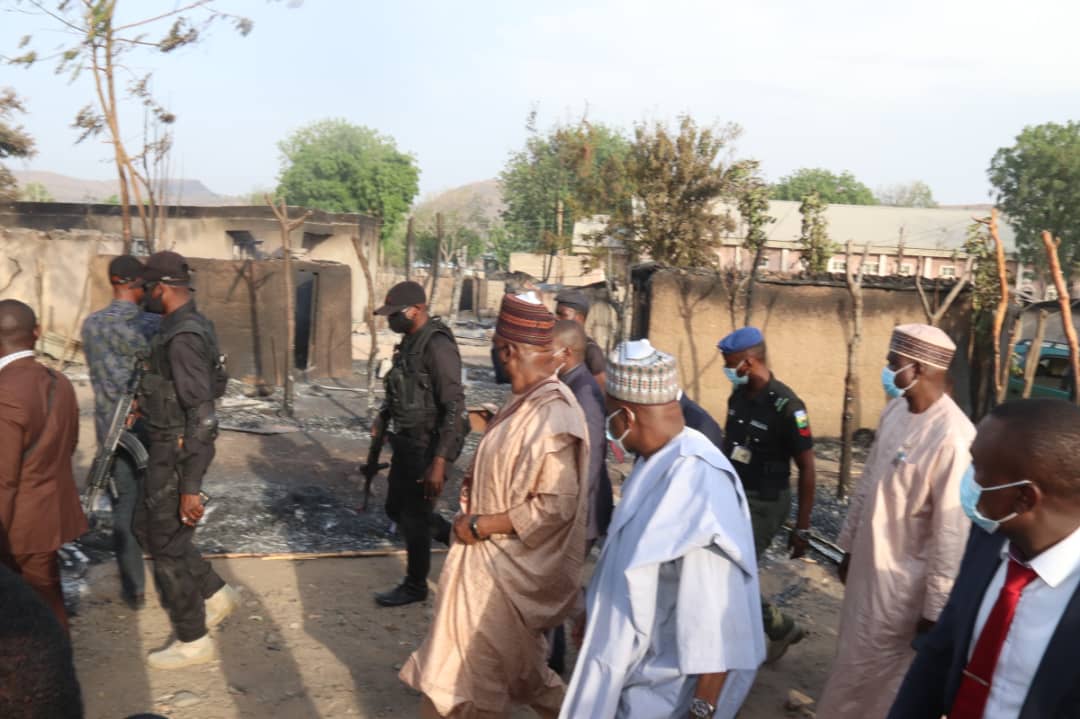 by afrikanwatchngr@gmail.com
We were asleep with our families in our homes only to have seen an armed militia with various kinds of dangerous weapons setting our houses and food storage facilities ablaze and asking us to vacate from the land or else they will wipe the entire Lunguda tribal communities. “The attack claimed 8 lives of our... Read More

We were asleep with our families in our homes only to have seen an armed militia with various kinds of dangerous weapons setting our houses and food storage facilities ablaze and asking us to vacate from the land or else they will wipe the entire Lunguda tribal communities. “The attack claimed 8 lives of our people as we were caught off guards and the attackers have threatened to return tonight with the expectation of having a field day like they did earlier but with the presence of His Excellency, the Governor and his prompt intervention through the deployment of security agencies we feel happy and pray the law will take its course on the perpetrators”. This was a narration by a Community leader at Nyuwar, a representative of the district head, Mr. Yohanna Istifanus who told the Governor how his community was invaded by attackers in the late hours of the night.

Governor Muhammadu Inuwa Yahaya of Gombe State has led heads of security agencies and top functionaries of his administration to a visit in Nyuwar, Jessu and Yolde communities of Balanga Local Government area of the state, where lives and properties worth millions of Naira destroyed as a result of communal clashes involving Waja and Lunguda ethnic groups.  The Governor who assure residents of the areas of his administration readiness to partner with relevant security agents to tackle insecurity will not abandon them.  “As you can see, I am leading all heads of security agencies in Gombe state to your community just to show you how committed the government is in ensuring that this crisis is brought to an end”. 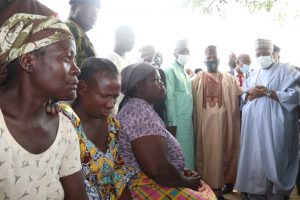 During the Governor’s visit

“I want to inform you that one of the measures we have taken was to impose a curfew to check movements of everyone and we have deployed security personnel to protect you and your property until normalcy is restored. Let me extend my heartfelt condolences to you over the loss of precious lives and property as a result of this senseless act.  Our thoughts and prayers are with you and,  as a responsible Government, we are conscious of our responsibilities of safeguarding lives and property of our people and my administration will do everything to bring perpetrators to justice”. 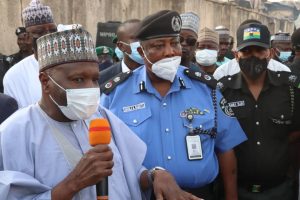 The Governor with security chiefs

It could be recalled that Governor Inuwa had earlier convened an emergency security meeting in his office following which the Government imposed a 24 hour curfew on Nyuwar, Jessu and Yolde communities with immediate effect to douse the tension and restore peace and order in the affected areas.  Security personnel have already been deployed to restore normalcy while the curfew will subsist until further notice.

Meanwhile, a community leader in Jessu, Mr. Jason Jase who took the Governor round, said they lost 7 persons in the community and several houses and food storage facilities were incinerated.