Commentary: The Military Coup in Mali, what it portends for other African Countries

by afrikanwatchngr@gmail.com
‘Despite the increased presence of international forces – including the French-led Operation Barkhane and the United Nations peacekeeping mission (MINUSMA) – violence has continued to increase in Mali in recent years. Attacks have grown fivefold since 2016, while the vast majority of the almost 2,000 documented fatalities related to the conflict in the country this year took place in... Read More

Express Recipes: How to make Creamy Papaya Raita
Just-in: Power of constituents in a legislative affair is paramount-DSP, Omo-Agege, speaks in Canada on Electoral reforms

‘Despite the increased presence of international forces – including the French-led Operation Barkhane and the United Nations peacekeeping mission (MINUSMA) – violence has continued to increase in Mali in recent years. Attacks have grown fivefold since 2016, while the vast majority of the almost 2,000 documented fatalities related to the conflict in the country this year took place in the central Mopti region, according to the International Crisis Group”

COMMENTARY-What began with reports of gunshots at an army barracks just outside Bamako in the morning of August 18 ended hours later with a group of mutinous soldiers arresting and forcing the resignation of Ibrahim Boubacar Keita, Mali’s embattled president? The coup leaders swiftly declared their intervention was meant to prevent the country from plunging into chaos, which they blamed on the government’s failure to tackle a series of overlapping crises.

In the weeks leading up to the coup, tens of thousands of opposition supporters had taken to the streets to protest against a disputed parliamentary election, persistent economic woes and a spiralling security crisis that erupted in 2012, when a previous coup allowed northern Tuareg separatists, allied with an al-Qaeda offshoot, to take advantage of the political instability and briefly seize large swaths of land in the north. That loss of territory precipitated the currently devolving situation, with armed groups linked to ISIL (ISIS) and al-Qaeda capitalising on intercommunal tensions as they jockey for control of Mali’s semi-arid centre.

But along with the hope of the social and political reforms demanded during the mass anti-Keita protests, the reality of the continuing conflicts in the country’s vast north and central regions remains. And while the coup has cast into uncertainty Mali’s political future, it has also raised fears the effects of the upheaval could further spill beyond the country’s borders and threaten the wider region. The military officers now in charge, calling themselves the National Committee for the Salvation of the People (CNSP), have promised to include the opposition and civil society in a transition back to civilian rule, which they have pledged will happen within a “reasonable” timeframe.

But two weeks since the coup, little has been made clear about who will lead the transition and how long it will last. The Economic Community of West African States (ECOWAS) regional bloc has been negotiating the details of the transfer of power, but the two parties remain at odds – ECOWAS has called for it to happen within a year, and has stemmed money flows to the country to pressure the military’s hand.

France, which has for years been militarily the most active international power in its former colony, has also called for a truncated timeline, with Defence Minister Florence Parly saying the transition should take place within “a matter of months”. “If this does not happen, the risk is that all this benefits terrorists first and foremost,” she told Europe-1 radio on Sunday. “Terrorists feed on the weakness of states.”

Despite the increased presence of international forces – including the French-led Operation Barkhane and the United Nations peacekeeping mission (MINUSMA) – violence has continued to increase in Mali in recent years. Attacks have grown fivefold since 2016, while the vast majority of the almost 2,000 documented fatalities related to the conflict in the country this year took place in the central Mopti region, according to the International Crisis Group. Meanwhile, about 1.7 million people have been displaced by the violence, according to the UN. 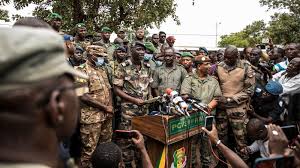 The broadcast after the coup

The first seven months of this year have proven deadlier than any year since Mali was thrown into turmoil in 2012. Despite early comparisons, however, armed groups in Mali are not likely to benefit as “significantly” as they did from the political instability eight years ago, said Flore Berger, a Sahel research analyst at the International Institute for Strategic Studies.

“It’s not gonna be like 2012 where they can actually take vast parts of the country,” she said. “First of all, they’re already there. They don’t control the entire areas where they attack, but they’re still there, they have quite a big presence.” “They also have changed their tactics. They’re not aiming at controlling major town centres. Now they aim at attacking and going south towards coastal West Africa,” Berger added.

Still, armed groups may increase attacks in the coming weeks in response to the upheaval, said Judd Devermont, director of the Africa Program at the Center for Strategic and International Studies (CSIS)

“My expectation is that they would look to continue to do attacks in the early period to demonstrate that this military government is weak,” he added. “And to persuade, or to undermine any local Malians’ views that maybe there’s a new dispensation on the horizon.”

Another difference from 2012 is that that coup was more of “a mutiny of the low-ranking officers and soldiers” motivated by “troops complaining about their military conditions” in operations against armed groups in the north, said Virginie Baudais, a senior Sahel researcher at the Stockholm International Peace Research Institute (SIPRI).

“There was not a really high-ranking officer implicated in the coup in 2012. And now it’s a high ranking officer and the coup appears to be well organised,” she said, referring to Assimi Goita, a colonel in the Malian special forces who is leading the CNSP.”It was much more complicated to negotiate with the junta in 2012 than this one,” she said.

More than two weeks after the 2012 coup, the then-military rulers folded to international pressure amid crippling ECOWAS sanctions, international travel bans, aid withholdings, and the declaration of an autonomous state by northern separatists who had seized key northern cities.

The military ceded power to a transitional authority led by the speaker of parliament, ushered in a 2013 election that was won by Keita, who got re-elected five years later.

This time, the international community has walked a careful line in condemning the unconstitutional transfer of power, which several regional leaders fear may set an example for their countries, while refraining from doing anything that could jeopardise the coordination that they see as essential to slowing the spreading of violence in the region.

CNSP leaders have also said they will continue to cooperate with the international forces currently based in the country in an array of missions aimed at routing out armed groups, while continuing a languishing 2015 peace agreement reached with rebel groups in the country’s north.

To date, France and other European powers, as well as MINUSMA, have said they will continue their operations during the transitional period, while the United States and the European Union have temporarily paused training activities in the wake of the coup.

“I would frame all of this as being really fluid,” said CSIS’s Devermont, “in terms of the way these international partners are legally able to work with the military government and operate in Mali, and what the military government’s ultimate partnership and position towards these actors will be.” Many regional and international leaders, while perhaps not publicly, had viewed the 75-year-old Keita as a flawed intermediary, analysts said. Devermont said Mali’s military during Keita’s rule has been historically inept at “consolidating control” and “backfilling” security gains made by international forces operating in the country.

However, a transition in power could tax the already overstretched Malian forces across the country. “If it becomes a military-led government, we would have to expect they would start pulling more military off the battlefield and into Bamako. So there could be some direct disruption to the limited capacity that the military already has,” Devermont said.

Jose Luengo Cabrera, a Sahel researcher at the International Crisis Group, said it remains “unclear whether the junta will respond more effectively to the broiling rural insurgency in central Mali, where military outposts and gendarmeries continue to be primary targets of jihadi attacks – at a time when security forces are evidently thinly stretched”.

He added that there have been increasing reports leading up to the coup highlighting “levels of demoralisation, barriers to promotion within military hierarchy, and, worst, growing disenchantment towards insufficient resources” within the military ranks.

It also remains unclear to what degree the Malian military will be motivated to enact needed reforms, including reckoning with abuses committed by security forces that have increased the enmity between the government and some communities, “especially now that the military is poised to become a principal political actor and likely to be resistant to certain changes requiring it to concede powers and be willing to be more accountable to the civilian justice system”, Luengo Cabrera said.

The UN’s human rights agency, as of June, had documented 230 “extrajudicial, summary or arbitrary executions” attributed to Mali’s security forces in 2020, including some that allegedly occurred under the control of the G5 Sahel Joint Force – a French-backed multinational military force in the Sahel composed of troops from Burkina Faso, Chad, Mali, Mauritania and Niger.

The agency has also documented “instances of enforced disappearances, torture and other cruel, inhuman or degrading treatment, arbitrary arrest and the destruction of several properties”.

Security forces have also been accused of using excessive force during the protests that preceded the coup, with sources describing to Human Rights Watch at least 14 deaths of protesters and bystanders “allegedly as a result of gunfire by the security forces in Bamako on July 10 and 11”.

With more questions than answers, many analysts agree that any transition will need to holistically contend the country’s myriad issues, with the primary focus on the underlying problems that plague citizens across its far-flung reaches.

“The root causes of the security situation are not security in itself, but they are mostly the economic situation,” said Gregory Chauzal, a senior researcher and director of the SIPRI’s Sahel West Africa programme.

“If you want to improve the situation in the long run, to have sustainable peace … you need to address what makes this conflict happen in first place,” he said, citing Mali’s “political and economic factors”.

Added SIPRI’s Baudais: “With MINUSMA, Barkhane, the G5 Sahel, Takuba, and every military intervention, the situation is still deteriorating since 2012. So we can see that the military solution is not the most effective.”