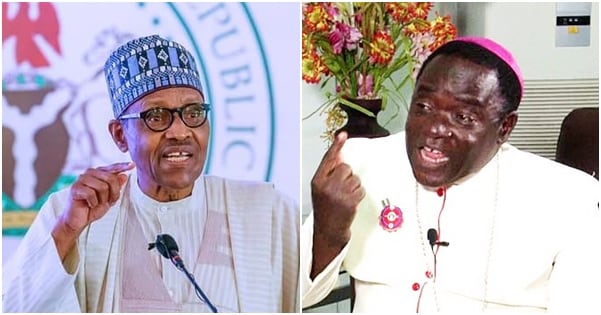 Bishop Kukah is not preparing a coup against Buhari.- Cardinal Onaiyekan- Says, we refuse to shut up against evil

by afrikanwatchngr@gmail.com
By Daniel Njienue, News/Comments, April 5, 2021 His Eminence John Cardinal Onaiyekan, the Emeritus Catholic Archbishop of Abuja Diocese  on Monday, reiterated that if anybody is thinking of stopping the Catholic Archbishop of Sokoto , Most Rev. (Dr) Matthew  Hassan Kukah, from speaking like John the Baptism against what he considered evil and a failed... Read More

Announcing a specification for PHP

His Eminence John Cardinal Onaiyekan, the Emeritus Catholic Archbishop of Abuja Diocese  on Monday, reiterated that if anybody is thinking of stopping the Catholic Archbishop of Sokoto , Most Rev. (Dr) Matthew  Hassan Kukah, from speaking like John the Baptism against what he considered evil and a failed state of President Buhari’s administartion , such a person or group  may be making a serious mistake. This is coming after the Presidency has described Kukah’s Easter message ungodly, accusing him of incitement.  Kuhah had described President Buhari’s government of creating more insecurity problems and pretending to play the ostrich role. Meanwhile,  Onaiyekan, who was a guest in the African Independent Televison (AIT) breakfast programme , Kakaaki , in Abuja, had said that  genuine religious leaders must join  to play better politics rather than leave it with old faces who have failed the country. He stressed that at no time should anybody stop men of good conscience from speaking the truth, no matter whose ox is gored. His words: 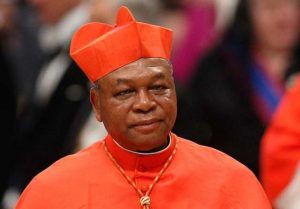 “With all due respect to whoever is speaking for the Presidency, he has a wrong idea of politics. Maybe, for him, politics have been just a game they play in the middle of the night. “But, if you understand politics as to how you organise and manage the community for the common good, we are all supposed to be politicians.“Does that mean that whenever we (religious leaders) tell the truth and work to make our country better, we should shut up because we are playing politics? No, we refuse. We will continue to talk. “In the whole project of nation-building and good governance, people, have different roles to play. The role of Mr. President is, of course, the most important in terms of organizing everything. “But the role of religious leaders, if you are a genuine one, should be to be able to speak in the name of God.

“So, let no one stop Kukah and other religious leaders from speaking from their hearts. They cannot force you (the government) anyways. Kukah is not preparing a coup against Buhari. He is only concerned about the people he sees every day. Kukah is speaking for so many who do not have a voice. “What we expected from the Presidency was to hear what Kukah had to say, and take the issues one-by-one; maybe give explanations, if there is a need for such, and hopefully consider considering his message in its future plans,” Onaiyekan said.

Onaiyekan however disagreed with the ideology of an Islamic cleric, Sheikh Ahmad Gumi, who once suggested for amnesty to bandits and terrorists. “We should not misread what Jesus Christ did in his relationship with sinners, criminals and worthless fellows. It is clear that Jesus condemned sin, even though he loved sinners. We should be telling bandits and terrorists: ‘Go and sin no more. We cannot in any way give them the impression that they are doing the right things.

“All the question of easy amnesty, under the pretence that they have repented, and spending money on them is sad, especially when we say we have no money to spend on the victims. Kids’ glove treatment of criminals boils down to bribing them to keep calm because the causes of criminality and insecurity will still be there. The more you treat criminals this way; the more others will come out so that they too can come to get the same treatment. There was no condition. There was no request of any condition”

On the part of Agitations for secession, the Cardinal blamed it on injustice and marginalization.“Government has not told us they are unable to protect us even though they have sometimes in the past told us to defend ourselves but how are we supposed to do that? So, the agitation for separation is simply a cry of anguish. Restructuring is one of the solutions (to Nigeria’s break-up). We don’t need a powerful president, but a safer nation. We have raised these issues of federal might and federal character to a level where they are no longer working for the people. So, the people have realised that things must change. They (Buhari and co)  should do something to generate hope in Nigerians”

The Cardinal concluded by noting that Mr. President and his Vice cannot just make statements as if they are preaching when they have executive powers given to them. It is not only the citizens that have given them power. God has also given them power. So, they have the responsibility to do something. We are tired of hearing beautiful words from rulers.