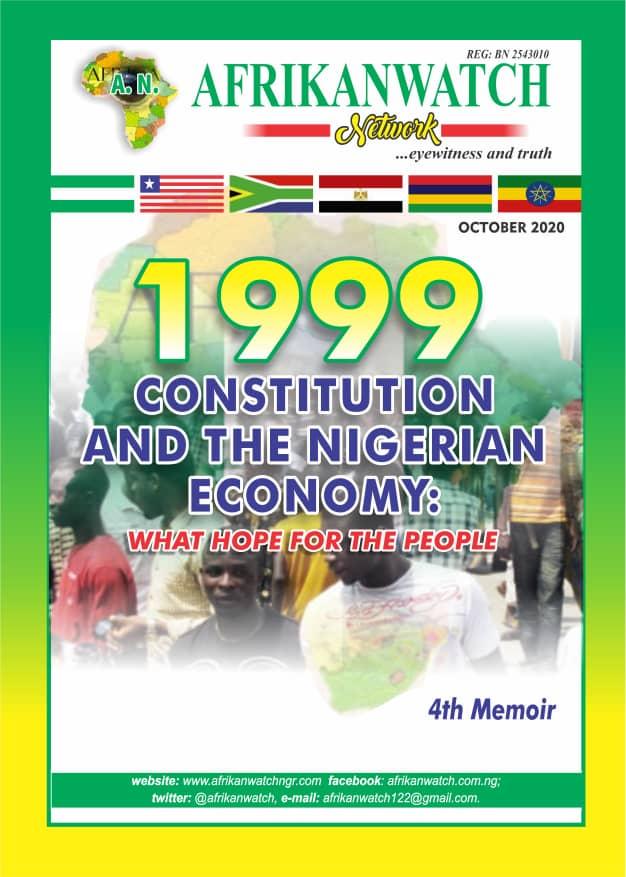 2020 AFRIKANWATCH MEMOIR REVIEW: 1999 Constitution and the Nigerian Economy: What hope for the people?

by afrikanwatchngr@gmail.com
By Mark Columbus Orgu, October 15, 2020, news/comments SALES PRICE FOR THE MEMOIR N3500:Sir John Macpherson in 1948 had earlier charged the Legislative Council on the making of Nigerian Constitution, that No one can hand over his responsibility in this matter to others. “Every Nigerian has a stake in his own country and it is... Read More

SALES PRICE FOR THE MEMOIR N3500:Sir John Macpherson in 1948 had earlier charged the Legislative Council on the making of Nigerian Constitution, that No one can hand over his responsibility in this matter to others. “Every Nigerian has a stake in his own country and it is for him by means of village meetings and Divisional meetings and Provincial meetings throughout the organization of which he is a member to make his views known” He concluded by admonishing, that there should be the fullest opportunity for public consultation at every level. This is how a democratic Constitution is made. We hope, that someday, the true Nigerian Constitution would come, a Constitution, we all can boldly call ours, and be proud to teach it everywhere, both in the Mountain. 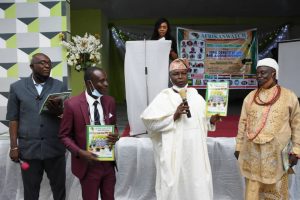 This year’s Afrikanwatch Memoir titled, 1999 Constitution and the Nigerian Economy; what hope for the people, dealt with issues with workable recommendations. Prof. Solomon Akinboye, A Professor of International relations and political scientist, University of Lagos, in his piece titled, Nigerian Constitution is Grossly Anomalous argued that, If we agree that a constitution is the organic law of the land and the legal framework within which policies that bind everyone including those in government are fashioned, then it is logical to state that there exists a constitution in Nigeria that is largely, but not totally, workable. It is not totally workable because of the various anomalies and infractions contained in the existing Nigeria’s constitution. Dr. Tunji Abayomi, blatantly refused to acknowledge that there exist a Constitution in Nigeria, but accepted that the various Constitutions from 1979 till date is a military Constitution that lacks legality and legitimacy. His contribution titled 1999 Constitution: A Fruit of A Poisonous Tree: The Need For Inclusiveness, he said:  “I don’t believe in the 1999 Constitution, because it is not legitimate, and it is not lawful. It lacks legitimacy and it lacks legality. 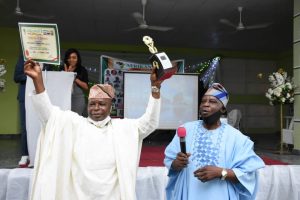 L-R, Prince Lateef Fagbemi, SAN, displaying his award as Afrikanwatch Legal Luminary and Man of the year, 202, presented to him by Senator Femi Okurounmu.

On his defense, Col. (Barr) Abayomi Dare retd, a former Nigerian Army Legal Director, argued that, the 1999 Constitution should not be seen as a military Constitution. His piece titled: 1999 Constitution:  The Military Acted out of Patriotism,  disagreed with Dr. Abayomi’s position. “I believe that what the Nigerian Military did, with respect to the Constitutions, that was alleged to have been fisted on the nation, was borne out of patriotism and zeal to move our dear nation forward. I dare to say that the doctrines of necessity became paramount. As far as I am concern, there is always room for amendments, hence our democracy is still work in progress”

For Prince Lateef Fagbemi, SAN, a prominent jurist, argued that, one of the most popular arguments in justification of amendments to the law is that the law is a fraud on the Nigerian people, smuggled in and dumped on us by the Military. Fagbemi however, said: “The greatest knowledge that we ought to have learnt from the operation of the Constitution is that, it cannot, as presently constituted, give us a country of our dream, politically and, most importantly, economically. Amendment of same is inevitable, and the earlier the better for all of us. His piece is titled: The 1999 Constitution Cannot Give Us a Country of Our Dream.

On his part, Prof Timothy Atte, a professor of International law in his argument, fearlessly stated:: The Constitution never originated from the people, but was imposed on them by the Military Regime of Abdulsalam Abubakar. Consequently, the framers basically considered the interest of the ruling oligarchy at the zenith of leadership that constitute the microcosm of the Society, at the expense of the common people. This accounts for the numerous crisis associated with the constitution that have heinous implications for socioeconomic development”, His write up is the theme of today’s lecture.

Prof. Patrick Egbule, Director of Academic planning , Delta State University, and former President, Nigeria Vocational Association, dealt with the issues of the loss of leadership values and economy, while admonishing Nigerian leaders to trace back when the country once excelled. His write up titled, No Nation has ever survived and achieved unity and development under gross acts of injustice, in his argument he said: “There are so many issues that has to be addressed – the constitution, true Federalism, state police, state of origin, Federal character, quote system, rotational presidency, resource control, and many more. In all, the basic question has to be answered – Do majority of Nigerians, including our leaders truly believe in one Nigeria? If yes, how can the patriotic zeal and inclinations of our founding fathers be fostered? For me “share the money” economy we are presently operating is not sustainable”

On his part, Mr. Alfred Omenihu, the publisher and editor-in-chief, National Impact, Magazine, argued that the Nigerian Constitution ought to serve as a catalyst that should promote national consciousness, political reconstruction and economic growth cum stability. His contribution titled Can Nigeria’s Constitution guarantee national economic prosperity?, he stated: Drafting of a new constitution and restructuring of the country’s political structure will be the beginning of a new dawn for Nigeria because it will be very unreasonable to expect different result with same rules of engagement and methodology. Political-governance arrangements that ensure participation and ownership of the Nigerian project by all segments of the federation—a stable and more efficient system which is fairer, more equitable and just. Some 230 years ago, Thomas Jefferson argued that “the two enemies of the people are criminals and government. Hence, my argument in this piece is that the genesis of rescuing Nigeria’s systemic collapse is a new constitution”

The next was written by my humble self, titled, Sir Hugh Foot and the revelation of making a people constitution and how the Nigerian green flag was raised, where l stated, “If we believe in the affairs of Nigerian project, we must then first, adopt a unification of agreement to critically review the 1999 Constitution to what the British government saw in Nigeria as regard to our strength regionally. In the South, strength, intelligence, determination to succeed, well established history, complex but focused lifestyle, and great aspirations was found,   In the East, (Ibos), strides in business and technology, West, (Yorubas), Commerce, Law and Medicine, while the North’s strength was largely on agricultural production. When all these surface in the review of the 1999 Constitution without local or foreign interest or individual’s interest, we can have a better country. Again, if this is reflected in the Review of the 1999 Constitution with autonomous power for each region to excel economically without a barrier, then, the yoke of poverty and economic retrogression will be a thing of the past”.

Certainly this great work of purpose largely contributed by men of repute with experience in governance and public service is a product of human’s satisfaction, I therefore recommend this Memoir for academic purposes and research, for politicians, public servants, civil society actors, students and the general public for their knowledge consumption.