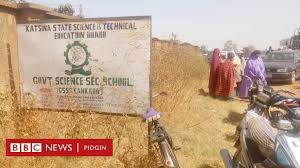 17 out of 333 kidnapped school boys in Kankara rescued -Gov. Masari, as expert says, security in Nigeria has collapsed like pack of cards

by afrikanwatchngr@gmail.com
By Gbenga Ojo, News/Comments, December 15, 2020 ABUJA-The former Speaker of the House of Representatives and Katsina State  Governor,  Rt. Hon.  Aminu Bello Masari has said yesterday evening that 17 kidnapped young boys of Government Secondary School, Kankara by armed bandits last week Friday had been found.  It could be recall that news had it... Read More

EASTER: The best of Nigeria is on the way-Cath. Priest, Prof. Kanu, says, COVID-19 has no negative image on the Church.

Just-in: COVID-19: Police commends Jakin NGO, as they give out food items

ABUJA-The former Speaker of the House of Representatives and Katsina State  Governor,  Rt. Hon.  Aminu Bello Masari has said yesterday evening that 17 kidnapped young boys of Government Secondary School, Kankara by armed bandits last week Friday had been found.  It could be recall that news had it that the kidnappers had opened discussion with the state government which may have yielded the current results.

Meanwhile, in an interview granted to the Governor by Deutsche Welle, (DW) Radio strictly  observed by our Crew,  Masari  noted that the captives (students) were found and  indeed have gone to meet their parents, stressing that most of the students  were in  a  Forest in Zamfara state. Reiterating that the government will continue to  put more efforts in securing lives and properties.

The erstwhile   speaker in his words stressed., “As at today (Monday), information available to me shows that 17 of the missing children have been found. 15 of them were found around Dinya in Danmusa, I was informed by the DPO. One other was found through them and the last, the father called that his son has returned home.

“All these missing children who have been found have been reunited with their families since we have shut down the schools. “I was told that they spoke with a teacher whose son was also kidnapped that the bandits said the helicopter should stop roving and that they will collect ransom but they didn’t specify. And so they ended the call. “Majority of the missing children are in Forest in Zamfara. By God willing, the children will be returned safely. “Efforts ongoing to secure their release within two to three days. We solicit for prayers and urge the parents to remain calm and patience as we are doing everything possible to rescue the children,”

It could also the recalled that the total number of the kidnapped boys were reported by state government to be 333, while federal government had earlier said, to be only ten. However, speaking with a security, (name withheld) said that the whole scenario playing out is as result low level of understanding of the security chiefs in the country that President Muhammadu Buhari blatantly refused to sacked, noting:   “The level of insecurity in the country has collapsed like pack of Cards